Why Does Boeing/Bell Hate Our Troops?

The Pogo Blog (Project on Government Waste), notes some concerns with the helicopter-cargo plane hybrid called the V-22 Osprey, which is now entering full production.

The concerns boil down to the vehicle requiring care to fly safely since it has limitations, and being relatively vulnerable to enemy attack. The trouble is, most of these concerns are also apt when aimed at most helicopters, which is what the V-22 will largely replace. This isn't to say that there might not be problems with a technologically ambitious project like this one, but I'm not convinced with their critques.

Their criticism of Bell/Boeing's ominious and deceptive advertising, however, is right on point. An imagine of Marines using the V-22 to invade a mosque in language with religious war overtones, in a situation where the V-22 would be unlikely to be actually used, is despicable. 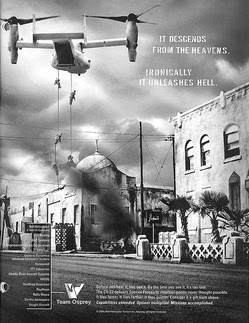 Caption: “It descends from the heavens. Ironically it unleashes hell.”

This kind of advertisement does far more to put our troops at risk abroad by inflaming hatred against America in the minds of moderate Muslims than any criticism liberals have ever laid at the foot of the U.S. military. They have apologized now and withdrawn the ad. But, the damage is done. While I defend their right to produce this offensive image in advertising, I can't help but ask: "Why does Bell/Boeing hate our troops?"
Posted 11:19 AM
Email ThisBlogThis!Share to TwitterShare to FacebookShare to Pinterest
Tags: Military