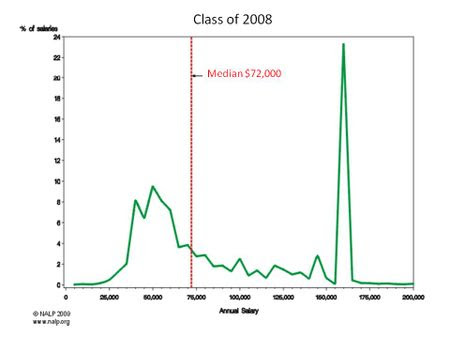 The bimodal distribution of income from law firms was not in place in 1996, but was obvious in every year from 2000 onward. When I graduated from law school, the going rate paid by big firms for entry level associates was about $80,000 a year in New York City, and varied elsewhere mostly according to the cost of living in the city in question.

The large law firms that drive these salaries are themselves an evolving beast. In the early 1960s, 73% of all lawyers in Detroit who worked in law firms at all graduated from one of five elite law schools, everyone else conducted solo practices.
Posted 12:52 PM
Email ThisBlogThis!Share to TwitterShare to FacebookShare to Pinterest
Tags: attorneys, Economics