Of Lemmings and Back Room Deals 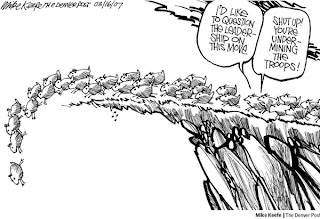 I refuse to be a political lemming. For all that people complain about the cat herding nature of political leadership, I prefer it to the alternative of blind obediance. If our political leaders need to herd cats, it is because our elected officials are awake enough to think for themselves and have their own opinions. It beats the kind of "democracy" we saw in the former Soviet Union. The fact that I am a Democrat is more a matter of corrolation between my own ideas and those of the party, than it is a matter of fealty to an ideology.

This doesn't mean that there isn't a place for back room deals and public unanimity. I'm not a fan of the importance of the idea that all discussions leading up to political decisions be made in public, so long as the decision makers are ultimately on the record about who put language into proposals and who supported or opposed it in the end. The social dynamics of a public debate often make compromise impossible; there is strong pressure in that context to stick to your guns, despite all evidence that does not support your position. Public debate too often has the ethical grounds of college debate team competitions. But, frequently, when people on opposite sides of a disagreement can be presented with the facts and discuss matters confidentially in a forum where they won't lose face, especially if the agreement is brokered by someone they both respect, they can find common ground. Preserving that common ground with the social pressure that can come from public unanimity can be necessary to accomplish something.

The most legitimate reason for holding your tongue in politics is to preserve a compromise that has already been reached between the interested parties. But, when no deal has been reached and it is a matter of setting forth the terms of the debate, it is legitimate to independently point who is right and wrong on the merits, without regard to general political commitments. Indeed, honest observers, whether or not they are participating in the decision making itself, have an obligation to look at issues based on the facts at this stage, and not just based upon who does or does not support a measure. Majorities don't have a monopoly on the truth, and the masses often taken cues from political leaders whom they rely upon to look into the issues more carefully than they can.

With the discussion above as prolog, it isn't surprising that, notwithstanding conservative Senator Lieberman's disservice to the notion, I am an independent liberal. While few people would confuse me, or my blog, for being conservative, I do often end up on the "conservative" side of debates in liberal forums like Daily Kos or political discussions at my very liberal alma mater. This is because I do have independent positions on most issues.

I think that the model of how politics works that underlies most progressive efforts at campaign finance reform is deeply flawed. Much of the same thinking goes into my distrust of many of the most common mechanisms of direct democracy. I'm concerned about the "criminalization of politics." While there is a place for public protest in politics, I think that most progressives overrate its importance.

I think we need to look at where legislative oversight of the executive has teeth, and where it doesn't, and adjust the non-constitutional aspects of the separation of powers to reflect those facts, for example, with more probing oversight of federal judicial appointments, and less oversight of lower level executive branch appointments.

I think that historical progressive distrust of state courts in favor of federal legal remedies needs to be rethought for the time being, as do the basic contours of the mechanism for securing government accountability.

While I'm no ideological fan of privatization and tend to think highly of governmental employees, I also recognize that overkill in civil service protections and public procurement rules can so flummox how things get done in the public sector, that they create an incentive to privatize. Opposition to privatization needs to go hand in hand with civil service and government procurement reform.

While I am no Chicago School economist, and I think that progressive mostly have the right economic goals, I think that many progressives throw the baby out with the bathwater by rejecting even well established principles of economics. I don't think that corporations or business is evil or that they have a particularly strong upper hand in the legal system, even though they are often indifferent to anyone else and can't be trusted to be honest when their own self-interests are at stake.

One not particularly partisan area of economic regulation where I differ with a lot of people who consider themselves left leaning, is land use regulation. I think that the status quo of zoning regulation is profoundly flawed and is a case where government regulation has contributed to a great many of our urban woes.

While anti-discrimination laws have virtue as a powerful moral statement that is valuable because it does influence private behavior, they also do a poor job of punishing the worst offenders, while attaching great liability to offenders who are inarticulate but oftne less culpable.

Looking at the energy issue has convinced me that nuclear power has powerful virtues, and that there are short and medium term limitations to renewables as an energy source. I'm even willing to give the concept of "clean coal" a fair, but skeptical hearing. When it comes to energy conservation, I'm a big fan of old fashioned solutions like freight rail and buses, rather than merely jumping on the new technology can save us band wagon.

While I think that strong public educational institutions are important, I recognize that there are real limits on the ability of schools to level socioeconomic inequalities, and believe that the American educational system frequently grants credentials not commensurate with the value that was added in the course of obtaining those credentials. We have far more graduates per capita than many other industrialized countries that are actually better educated. Teacher's education is a particularly weak link. Another problem is the belief that we must postpone life determining educational decisions until the latest possible moment to preserve children's opportunities in life, which is often counterproductive.

I am not opposed to gun control, but also recognize that there is strong statistical evidence to show that gun control short of gun control at a widespread national level, has only a limited ability to impact crime rates. My opposition to the death penalty in many situations where it is applied now is more practical than moral. I see the importance of having an effective means to revisit possible wrongful criminal convictions while recognizing that the current habeas corpus system does so poorly.

I do think we have a moral obligation to impose more serious sentences for serious offenses than we do for less serious offenses. While I don't like draconian sentencing systems, many of which are simply irrational, I also recognize that recidivism is a serious issue that can't practically be addressed with education and treatment alone. We do underutilize proven methods of rehabilitating convicted offenders. But, some repeat offenders do need to be locked up for a long time for the public good.

Rather than being a pacifist, I think we need to re-evaluate when military force is appropriate, sometimes using when we don't now, and other times not using it when we have in the past. Rather than fixating on the overall size of the defense and intelligence budget, as many progressive do, I care more about making these institutions work better and developing a mix of resources and principals for using them, that is better suited to our needs.

Why ruffle feathers with the home team? Because political parties are just a tool for getting government to do the right thing. Right now, most of the time, the Democrats have it right, and the Republicans are screwed up, so that is the best tool. But there is nothing sacred about either party's virtues.
Posted 10:31 AM
Email ThisBlogThis!Share to TwitterShare to FacebookShare to Pinterest
Tags: personal reflections, Political Identity, Political Tactics, Political Theory