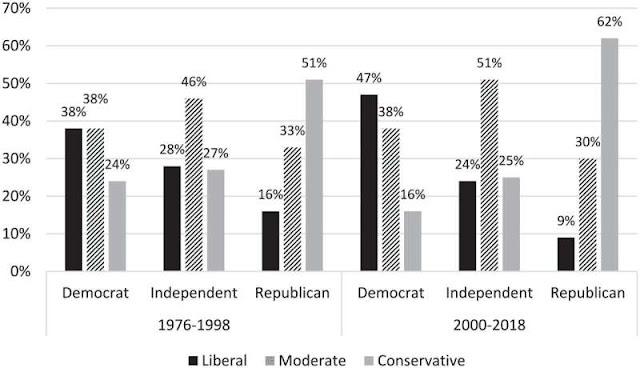 The data in the chart is from the General Social Survey, a long standing effort to track American's views on a variety of matters over a long time frame in a comparable way.

Quote Of The Day

A few years ago, I was working with the State of Wyoming in Cheyenne. Every morning I would hear sirens at 11 am. I asked about the sirens. That is the time that the maids in hotels find the opioid overdoses.

Lots Of Wives And Children, Many Mistreated

The leader of a small polygamous group near the Arizona-Utah border had taken at least 20 wives, most of them minors, and punished followers who did not treat him as a prophet, newly filed federal court documents allege.
Samuel Bateman was a former member of the Fundamentalist Church of Jesus Christ of Latter-Day Saints, or FLDS, until he left to start his own small offshoot group. He was supported financially by male followers who also gave up their own wives and children to be Bateman’s wives, according to an FBI affidavit.
The document filed Friday provides new insight about what investigators have found in a case that first became public in August. It accompanied charges of kidnapping and impeding a foreseeable prosecution against three of Bateman’s wives — Naomi Bistline, Donnae Barlow and Moretta Rose Johnson. Bistline and Barlow are scheduled to appear in federal magistrate court in Flagstaff on Wednesday. Johnson is awaiting extradition from Washington state.
The women are accused of fleeing with eight of Bateman’s children, who were placed in Arizona state custody earlier this year. The children were found last week hundreds of miles away in Spokane, Washington.
Bateman was arrested in August when someone spotted small fingers in the gap of a trailer he was hauling through Flagstaff. He posted bond but was arrested again and charged with obstructing justice in a federal investigation into whether children were being transported across state lines for sexual activity.
Court records allege that Bateman, 46, engaged in child sex trafficking and polygamy, but none of his current charges relate to those allegations. Polygamy is illegal in Arizona but was decriminalized in Utah in 2020.

This FLDS offshoot is small and exceptional, but clearly abusive. I hadn't been aware of the decriminalization of polygamy in Utah in 2020 (if that is an accurate description), in response to less troublesome cases:

Marion Timpson’s own marriages reflect Utah’s recent legal battles over polygamy.
“I married Holly in 2005 and Katie in 2013, and I married Lisa in 2014,” the polygamist said, referring to his wives.
One of his marriages took place shortly after a federal judge struck down Utah’s anti-polygamy laws. Reality TV polygamist Kody Brown and his wives sued the state and won, effectively decriminalizing plural marriage as a religious belief. Then a federal appeals court reinstated the bigamy law and the Utah State Legislature passed a law that re-criminalized bigamy. . . .

In 2020, the Utah State Legislature passed a law to decriminalize polygamy, reducing bigamy among consenting adults from a third-degree felony, punishable by prison time, to an infraction on par with a speeding ticket.

From the Fox News.

The Democrats have secured one net U.S. Senate seat pickup for a 51-49 majority after incumbent Democratic Senator Raphael Warnock of Georgia defeated deeply flawed Republican candidate Herschel Walker, in a runoff election that concluded today in a roughly 51.3% to 48.7% race with 99% of the vote counted (a 2.6 percentage point margin of victory), which are results significantly better than in the first round race, which Warnock won by a 0.9 percentage point margin with about 2.1 percentage points going to a Libertarian candidate. Warnock apparently won about 90% of the third-party vote in the runoff election (holding all other things equal).

In the races of the U.S. House, taking the last outstanding race, CO-3, in which deeply flawed Republican incumbent Lauren Boebert is almost sure to survive the automatic recount currently underway, by roughly 0.16 percentage points, the closest federal election in the country this year (in which should have been a safe Republican seat).

Democrats have lost a net ten seats and their majority in the House. Republicans will have four more seats than they need for a bare majority in the U.S. House (almost exactly 51% of the total number of seats outstanding in a mirror image of the Senate).

The marginal seats in both chambers were resolved in elections with less than two percentage point margins of victory in a nation poised on a knife edge of equal support for the two major political parties in the context of the current rules of the game. 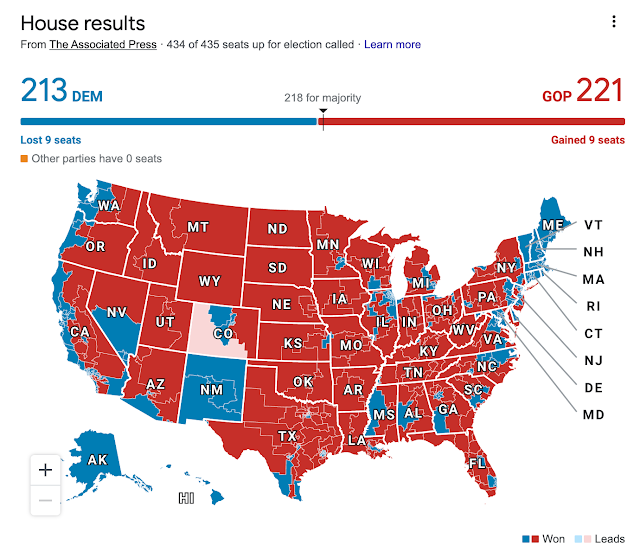 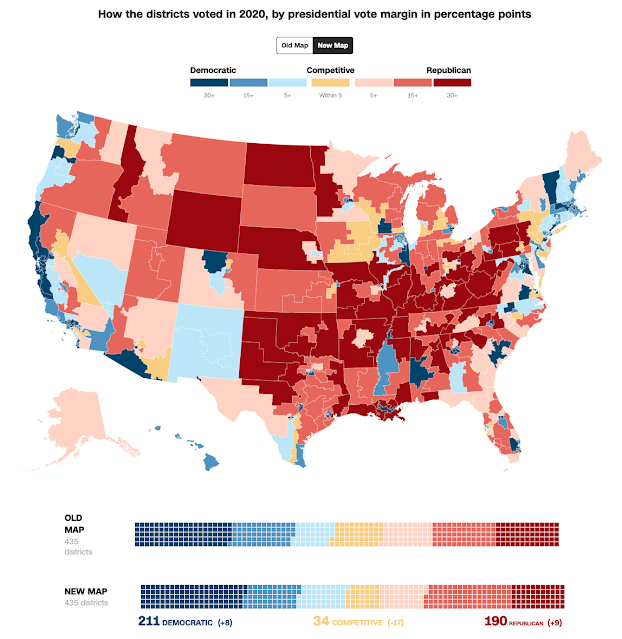 So, with a Democratic President and Vice President, and a 6-3 conservative majority in the U.S. Supreme Court, the federal government will spend the next two years in a gridlock even deeper than the current one in which the lack of a Democratic filibuster-proof majority in the Senate has prevented almost all significant legislation from being passed. But Democrats will have an easier time getting President Biden's appointees confirmed.
Posted 9:28 PM No comments:
Email ThisBlogThis!Share to TwitterShare to FacebookShare to Pinterest
Tags: 2022 election, Congress

Where Did Originalism Come From?

The reality of the history of the originalist movement in legal history, and the myth about its origins are quite different.

Empirically, the paper shows that the realigning GOP’s originalism grew directly out of political resistance to Brown v. Board of Education by conservative governing elites, intellectuals, and activists in the 1950s and 1960s.

From here via Fully Myelinated.

Citizenship and Place Of Birth In The United States

The population of the United States in the 2020 census was 331.44 million people.

People Born In The United States

- U.S. Citizens Who Were Born Abroad

Over the last ten years an average of about 740,000 people per year have been naturalized as U.S. citizens. Adult naturalized citizen break down demographically as follows; 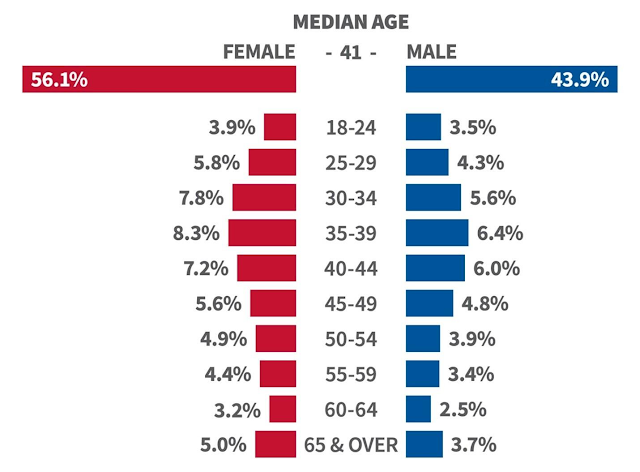 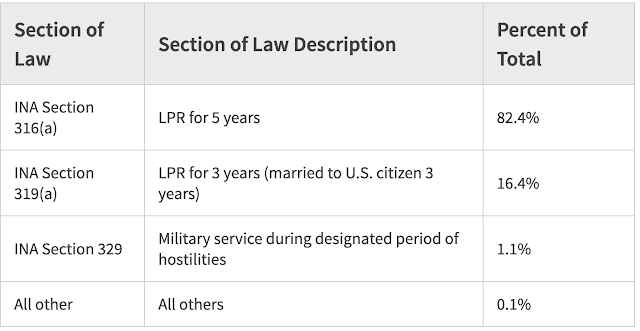 The median years spent as an LPR for all citizens naturalized in FY 2021 was 7.3 years. The median years spent as an LPR varied by the citizens’ country of birth. The countries with the largest number of new citizens in FY 2021 . . . applicants from Mexico spent the longest time, with 10.7 years, and applicants from Nigeria spent the shortest, with 6 years.
About 13.9% of recently naturalized U.S. citizens were born in Mexico.
But about 0.1%-0.6% of the U.S. population (about 21,875 to 131,250 people), based upon my back of napkin estimates, are people born outside the United States who are U.S. citizens because one or both of their parents were U.S. citizens (under rather complicated rules). I have not been able to locate good direct statistics for the size of this population.

My estimate of the number of people who are U.S. citizens at birth who are born abroad is based in part upon the fact that at any given time, about 1% of U.S. citizens live outside the United States. This population is male biased due to the significant share of these U.S. citizens who are active duty military personnel serving abroad (a population that is about 82% male), and even female U.S. military personnel tend to receive a discharge from the military or to be in the U.S. rather than being deployed abroad when they give birth.

About 6% of undocumented U.S. residents (about 0.2% of the U.S. population) are active participants in the DACA program. About 80.6% of DACA participants were born in Mexico.

Voter turnout in the U.S. midterm elections in 2022 as a percentage of eligible voters (of the 50 states and the District of Columbia) was as follows:

(Source)
Turnout was slightly lower nationwide than the record modern midterm election turnout of 2018.
About 88% of people who are eligible to vote are active registered voters in Colorado. In Colorado, about 5.8% of adults (i.e. people who are at least 18 years old) are ineligible to vote because they are not U.S. citizens and about 15,000 adults (0.3%) are ineligible to vote because they are currently in prison.
The adult population of Colorado in 2022 was 4,631,586, of whom 4,346,493 were eligible to vote.
Nationally 7.3% of the adult population is not eligible to vote, because they were not citizens (in most cases), or as collateral consequences of a criminal conviction 1.2% (or both). About 7.5% of people in the U.S. are not U.S. citizens, but some of those non-citizens are not adults or are also disqualified from voting due to criminal convictions in the state where they live. Disqualification from voting as a collateral consequence of a criminal conviction differs materially from state to state.
Posted 11:25 AM No comments:
Email ThisBlogThis!Share to TwitterShare to FacebookShare to Pinterest
Tags: 2022 election, Colorado Politics, Election Law 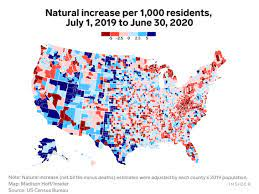 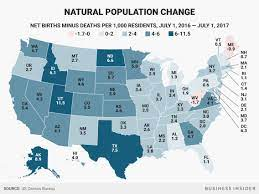 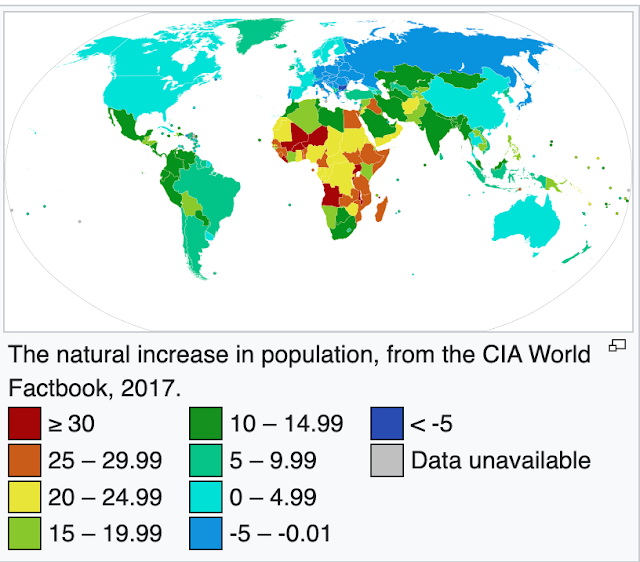 Last map from Wikipedia (per 1000 people per year).
Posted 10:48 AM No comments:
Email ThisBlogThis!Share to TwitterShare to FacebookShare to Pinterest
Tags: Demographic Change
Older Posts Home
Subscribe to: Posts (Atom)