Will The Air Force Try To Replace The A-10 With Drones?

The Air Force is considering the possibility of replacing the A-10 Warthog, the primarily purpose built aircraft in the Air Force for providing close air support to ground troops, with drones. But that is arguably the worst role of the many that the Air Force has on its plate to turn over to AI systems in a drone, and remote control systems can be jammed at a fairly modest level of technology, sophistication and cost (it is almost always easier to destroy than to create).

[L]ower-cost unmanned aircraft using AI-driven systems could help the Air Force finally adopt a light attack platform after more than a decade of abortive efforts in this regard. Despite initial plans to buy hundreds of aircraft, the service dramatically scaled back its most recent attempt, known as the Light Attack Aircraft program, in 2019. U.S. Special Operations Command (SOCOM) subsequently tried to revive the project, but Congress blocked that effort in its annual defense policy bill, or National Defense Authorization Act (NDAA), for the 2021 Fiscal Year. 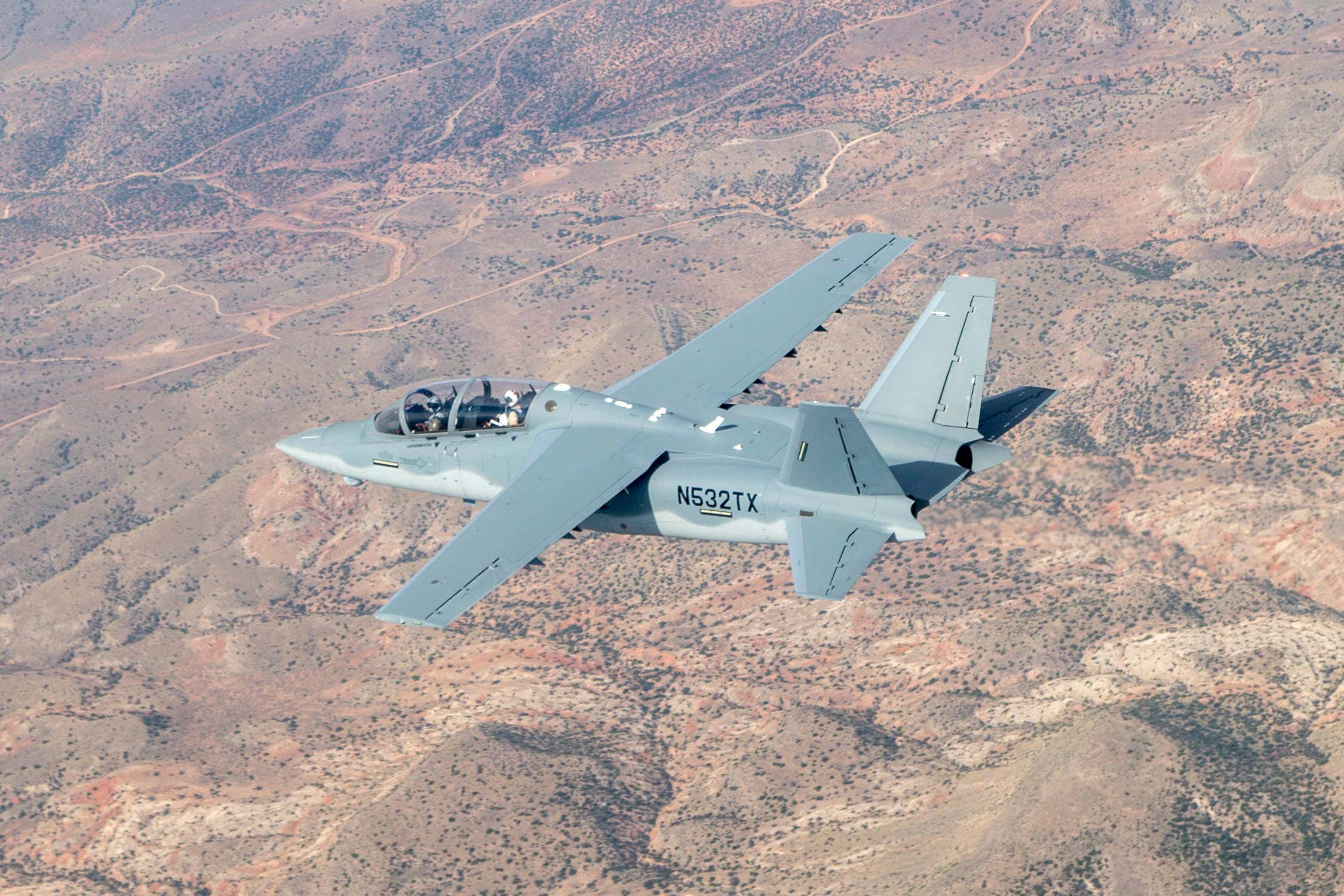 U.S. AIR FORCE/CHRISTOPHER OKULA
A Textron Scorpion above White Sands Missile Range, New Mexico, while participating in a U.S. Air Force experiment in 2017.
So, there remains a requirement for a light attack platform that could potentially be filled by an advanced unmanned alternative. In the meantime, the Air Force had also attempted to cease buying MQ-9 Reaper drones, which currently undertake many of these types of lower-end combat missions, but this was ultimately blocked by Congress, too. Still, close air support (CAS) is a mission that still benefits hugely from a human in the cockpit. As such, the exact capability set of a semi-autonomous drone, in this regard, may be limited. One could imagine giving the targeting control directly to those the drone is tasked with supporting on the ground though. This could compress the kill-chain and help with providing CAS in contested environments where a stealthy and attritable airframe may be overtly beneficial. Just such a concept was floated by the then Air Force Chief of Staff General Mark Welsh, who described it as “a flying Coke machine.” You can read all about that in this past article of ours.

From here.
The linked article also discussed Air Force options to use drones as stand in for enemy forces in training exercises (possibly freeing up funds for other purposes such as A-10 replacements), and building more new F-16 fighters, noting that the "Air Force has already committed to buying new F-15EX fighter jets to top up its current tactical fleet, but additional orders for the F-16 — which first flew back in 1974 — had not previously been talked about publicly."
The interest in reviving the previous generation of U.S. fighter jets which lack the stealth capabilities of the F-22 and F-35 fighter jets that are the current state of the art in the U.S. warplane fleet reflect the fact that the new models are extremely expensive and that stealth isn't necessary for lots of fighter jet missions. As the linked article on the F-15EX notes:

“The F-15EX is the most affordable and immediate way to refresh the capacity and update the capabilities provided by our aging F-15C/D fleets,” General Mike Holmes, head of Air Combat Command, also said. “The F-15EX is ready to fight as soon as it comes off the line.” . . .

"The F-15EX is the most advanced version of the F-15 ever built, due in large part to its digital backbone," Lori Schneider, Boeing's F-15EX Program Manager said in a statement regarding the new contract award. “Its unmatched range, price, and best-in-class payload capacity make the F-15EX an attractive choice for the U.S. Air Force.”
A key difference between the F-15EXs and the older F-15C/Ds they are slated to replace lies in the former's Open Mission Systems (OMS) architecture. The OMS architecture will enable the rapid insertion of the latest aircraft technologies. The F-15EX will also have fly-by-wire flight controls, a new electronic warfare system, advanced cockpit systems, and the latest mission systems and software capabilities available for legacy F-15s.

The marginal per unit cost of an F-35C (the carrier launched version) is apparently about $78 million each with an average cost per unit including development costs of about $117 million each. The F15-EX will cost about $88 million each.
Posted 11:59 AM 2 comments:
Email ThisBlogThis!Share to TwitterShare to FacebookShare to Pinterest
Tags: Military, Technology

How do we deprogram the roughly 50 million American voters who are just flat out delusional and actively insulate themselves from more reliable sources of information? Will those who have been fooled by Trump's lies about election fraud in the 2020 Presidential election come to accept the fair and square results that we had (for the most part)?

Will authorities continue to follow through on the way of anti-domestic terrorism action that they took following the January 6 seditious riot at the Capitol?  Will regulation of police abuses and the cause of racial justice that Biden championed in his inauguration speech actually improve?

Will we be able to unwind the national surge in murders that we experienced in 2020?

Will Trump be convicted of  the impeachment charges he faces? Is the Republican Party actually at risk of a schism between Trumpists and more traditional conservatives? Has a large minority of the GOP lost the support of Big Business for the foreseeable future?

Can we smooth out the inevitable decline in the rural population of the U.S. that has left large swaths of the U.S. in a state of malaise?

How do we roll out a COVID-19 vaccine while keeping new more virulent strains which may not be as deterred by the vaccine under control? Will this allow schools from pre-K to college return to business as usual by the fall of 2021? Will women who have disproportionately left the labor force in droves in 2020 return to work when and if that happens? How do we treat and manage the months long serious symptoms of the many millions of Americans who have contracted COVID-19 but not died from it? What will be the long term demographic and societal consequences of the 2020 baby bust in a year when births had already been on track to reach record lows before COVID? Will the people who have been hardest hit economically by COVID-19 be able to recover when it's over?

How do we establish a battery charging infrastructure that in conjunction with new battery technology ready to be available in the mass new vehicle retail sales market in three to six years can bring us to a tipping point where electric vehicles dramatically increase their market share (currently 1.9% of new vehicles which replace 1/7th of the vehicles on the road each year or less)? What other Paris Climate Accord and Biden Administration climate change policies will we need.

Will Democrats in Washington D.C. be able to pass significant legislation despite a lack of a filibuster-proof majority and the will within its caucus to use the nuclear option to abolish the legislative filibuster? Will election law reforms and redistricting reforms be in place in time to have an effect in the 2022 election? Will efforts to provide a rapid path to citizenship for millions of foreign born people who reside permanently in the U.S. bear fruit quickly enough to impact the 2022 election outcomes?

Will the U.S. be able to mend ties with its historic allies whom it alienated during the Trump Administration? Will U.S. exporters be able to recapture foreign markets that it ceded to other exporters as a result of Trump's trade wars?

Will marijuana decriminalization at the federal level, and more generally, a deescalation of the "war on drugs" come to pass?

The partisan edge due to the Electoral College was worse in 2020 than at any time since 1948, 1936, 1920, 1876 and 1872 (the flip from 1872 to 1876 was particularly stunning). But the fact that it has changed over time provides a little hope. Much of the change is due to shifting partisan coalitions. It is also worth observing that the partisan edge only matters when the parties are roughly equally balanced, which is a state they are naturally attracted to according to political theory, but isn't a stable equilibrium.

It is also notable that in 2008 and 2012, Colorado was a tipping point state, while now it is a safe blue state.