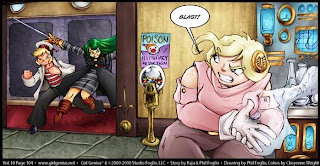 One of the long standing issues in tort law is the relevance of contributory negligence. The general rule is that you can sue someone for the monetary value of the compensatory damages caused by that person's failure to exercise reasonable care to prevent a reasonably foreseeable injury to a person who is harmed. But, a jury must also consider the contribution of the victim and third parties to the harm.

In products liability law, which is usually considered a "strict liability" tort, there is liability for harm even if the reasonably foreseeable injury is a result of a defect that could have been made even by a reasonable person. But, a key element of product liability law is the duty to warn. A foreseeable harm that is an inherent part of the product that you warn against does not give rise to civil liability if you warn someone in writing of the risk, even most people don't read those warnings, because a "reasonable person" would have read the warnings.

The example above, a gumball machine with poison gumballs clearly labeled as such, would seem to be a case where a foreseeable harm was created, but anyone who was harmed would themselves have taken acts that showed their contributory negligence.

The actual poison gumball case turns out to be an easy one, because there is an outright tort law prohibition on deadly traps, even when the person hurt by them is a criminal.

But, the example illustrates the problematic nature of assuming that contributory negligence by a victim or a warning should necessarily relieve someone of civil liability for harm to another. In this case, and many that do not fall within a special rule of tort law, warnings are given with the strong expectation that people will ignore the warning and be hurt anyway, when it might have been possible to simply remove the risk of a foreseeable harm in the first place.

While disclaimers or warnings or contributory negligence may make sense as defenses to unavoidable risks, it is far less obvious that they should be a full defense to a risk that could have been prevented by means more effective than a warning.
Posted 4:52 PM
Email ThisBlogThis!Share to TwitterShare to FacebookShare to Pinterest
Tags: private law