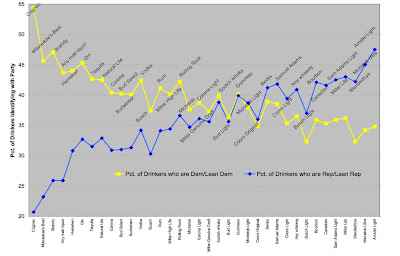 There is a strong link between the way that you identify politically and your cultural identity. While the alcohol in all alcoholic drinks is identical, the kind of drink in which you consume alcohol is largely a matter of cultural preference and identity; like fashion a choice of type of alcohol is a way of expressing your personal style and your personal style is driven by your cultural identity.

The fun part, since what we know directly about the cultural drivers of political identity is probably more accurate than what we can infer indirectly from charts like the one above, is that it invites us to trace the links between drink types and cultural identity and political identity. For culture lovers, the fun part is drawing inferences that connect cultural groups in a political party's coalition and that group's drink preferences. For politics lovers, the fun part is refining one's intuitions about which cultural factions are part of the overall coalition represented in each major political party.

The clear Republican edge in mostly in a number of beers and blended whiskeys. The clear Democratic edge is in most other kinds of liquor.

Blended whiskeys are culturally associated with the Southern/Country-Western culture. The Democratic preferences are suggestive of a mix of ethnic votes and "cultural elites" who are more willing to try "sophisticated" variations.

Beer preferences are a bit more subtle. Sam Adams may do well with Republicans because it is associated with Patriotism, while Corona may not seem "American" enough for Republicans. Of course, the biggest selling beer brands, because so many people drink them, have a weaker political association in general.
Posted 4:03 PM
Email ThisBlogThis!Share to TwitterShare to FacebookShare to Pinterest
Tags: culture, Political Identity

Disappointing.
No PBR.
No "hipster" microbrews.

I HATE THE DOUBLE CAPTCHA SHIT.