The Most Frightening Drone Threat 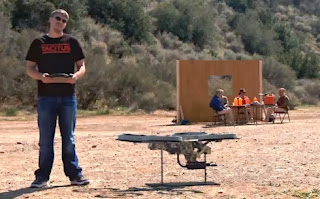 The militarized drones that scare me aren't the small aircraft sized drones without pilots.  They are the low budget small arms firepower class drones that fill the role of infantry that can fly.

Aircraft sized drones without pilots do essentially the same things as aircraft, but without putting a pilot in harm's way.

Small drones fill a niche that no current technology fills.  Moreover, this is technology that can't be denied to foreign countries and terrorist groups that could transform how battlefields work in the future.
Posted 10:20 AM
Email ThisBlogThis!Share to TwitterShare to FacebookShare to Pinterest
Tags: Military, Technology