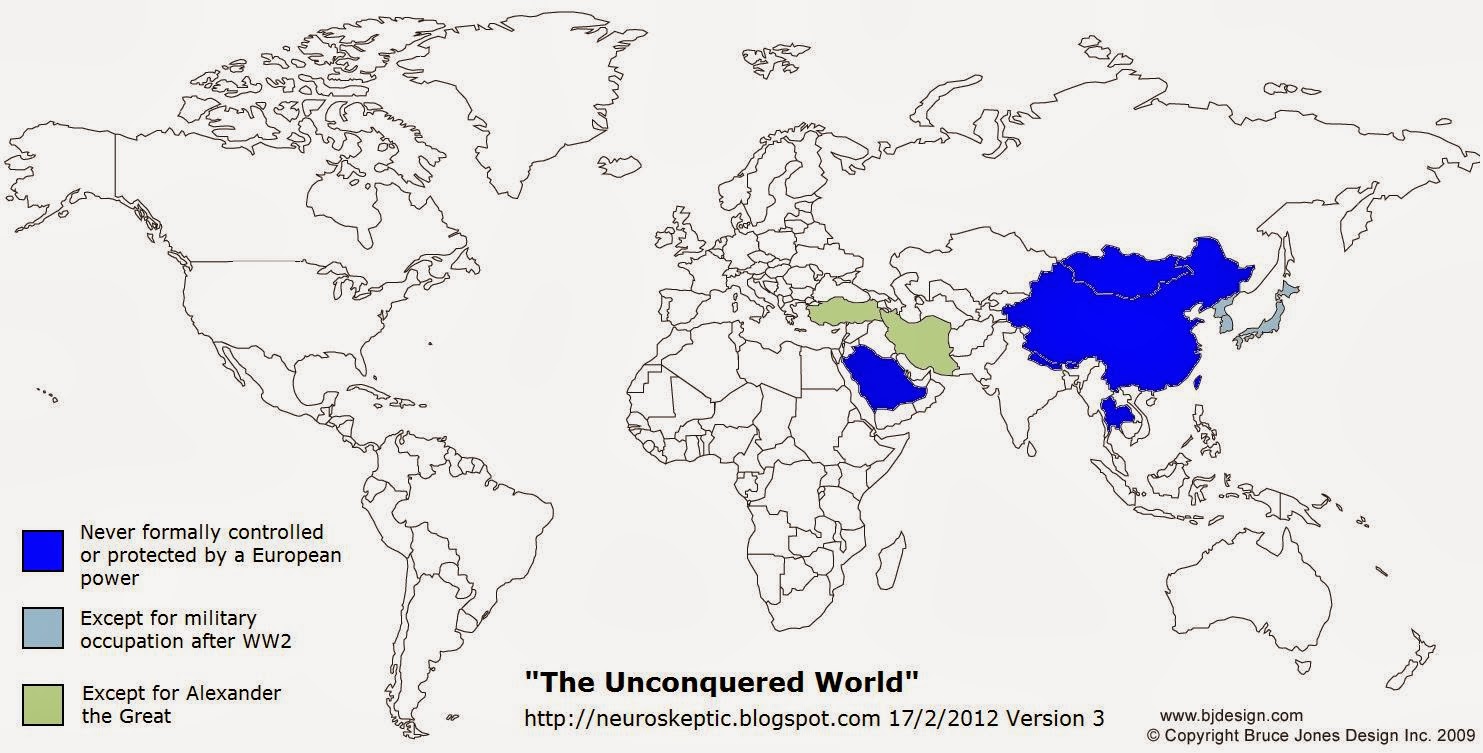 Neuroskeptic prepared a few years ago, the map above of "The Unconquered World" showing countries that had never been controlled or protected by a European power.  The short list:

The common denominator seems to be the existence of strong local monarchies at the time of European colonial expansion.

Of course, some of these countries were conquered by non-European powers.

* Part of China were also occupied by Japan in the 20th century during the Second Sino-Japanese War (July 7, 1937-September 9, 1945).  Manchuria, in Northeast China, was occupied by Japan even longer, starting in 1931.

* Centuries earlier, in the 13th century, Mongolia conquered territories that included Korea, China, Iran, and Turkey (although not Saudi Arabia or Thailand).

* The Persian Empire (i.e. Iran) was swiftly destroyed by Islamic invaders around the 7th or 8th centuries CE.  This followed an Indo-Iranian conquest 1500 BCE-2000 BCE.  While neither was a "European" invasion in a colonial era sense, the first would have originated in Central Asia from people with Southeast European roots, and the second would have included Levatine invaders who were part of "Western" civilization before converting to Islam.  In between (for about 500-800 years), it strongly culturally influenced by the Greeks who conquered them and who would be considered European.

* Turkey was culturally Greek from the time of Alexander the Great.  It was part of the European based Roman Empire at Rome's greatest extent as of 117 CE and remained part of rump Byzantine Empire that was linguistically Greek, until the Islamic Empire started to eat away at the Byzantine Empire (starting in the 7th or 8th century CE and completed around 1071 CE, ultimately giving rise to the Ottoman Empire).  Asian Islamic conquest that caused a shift to the Turkish language in the Middle Ages also had about an 8% population genetic impact.

In 1923, half a million Turks living in Greece were relocated to Turkey and 1.5 million Greeks living in Turkey were relocated to Greece, and there was also the Armenian genocide that killed about 1 million to 1.5 million Armenians in Anatolia in 1915.  Turkey declared independence from the Ottoman Empire in 1919 and radically Westernized the country in some respects under Ataturk.  Thus, prior to World War I, Turkey (as part of the Ottoman Empire) was far more cosmopolitan.