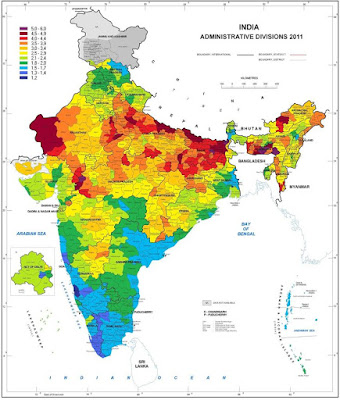 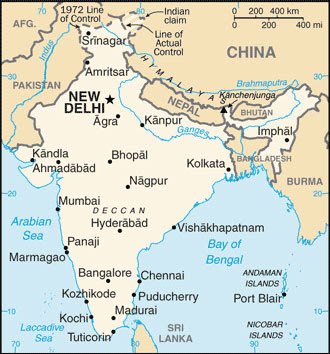 The map above shows the most recent district level fertility rates in India. It is immediately clear why comparing India to Pakistan and Bangladesh (let alone Nepal, Sri Lanka, or Bhutan) is a major error.

In some of the northern regions of the Hindi-speaking “cow belt” as well as the lightly populated Northeast the total fertility rate is similar to what you find in Nigeria, between 5 and 6 children per woman. For comparison the TFR for Saudi Arabia is 2.75. For Bangladesh it is 2.20 and for Pakistan it is 3.6. In contrast, much of the South, Punjab, and West Bengal have below replacement fertility.

In the comments, he notes that data is not available from the gray area (basically Kashmir) due to political turmoil there.

The cause isn't obvious, leaving us to speculate based upon correlations rather than causation. Generally speaking linguistically Indo-Aryan, Munda and Tiberto-Burmese regions seem to have higher fertility than linguistically Dravidian regions. Alternatively, fertility is lower in places where crops with Sahel African crops thrive and is higher in places where Fertile Crescent Neolithic crops and rice farming are employed.

Interesting.
Do Mumbai and Chennai break away from the rest of India?

Both of those major cities are "green"which is intermediate in fertility.