A large share of the difference in productivity between firms in different countries and between firms within a country are attributable to the adoption by the more productive firms of management practices that are absent in the less productive firms according to a recent, gold standard study of the topic. This strongly echos insights I've drawn from the involvement of some of my extended family members in the establishment of a private college in Tanzania.

Some implications of this fact:

1. Management practices are something that can be intentionally changed. The present is not destiny. In contrast, efforts to identity average national IQ as a source of the difference in the wealth of nations only recommends complacency and provides no action items for economic development.

2. Most countries have at least some examples of firms using significantly better than the norm management practices that can serve as models for other firms. I suspect that the distribution of management practices within countries shows regional differences that help explain why big businesses can regularly sweep large regions in the face of local competition.

3. The people who have the power to change management practices in firms have a strong economic incentive to do so. Policy change is a matter of both power and choice. Here, informing choices is more important the power, because the people in power of immense incentives to listen to this advice.

4. Human capital is at least as important as financial capital, if not much more so. Breaking pervasive government policy decisions that assume the opposite is critical for economic development.

5. Management practices are more selective and empirically proven ways to tweak corporate culture than all or nothing aping of a culture with higher productivity a la early 20th century Turkey, which had businessmen dressing in a climate-inappropriate British fashion. This allows for reforms that are less culturally disruptive and may face less resistance.

Some details from the link (emphasis added): 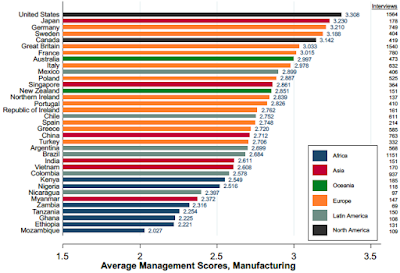 Many estimates (e.g. Jones 2015) calculate that US productivity is more than 30 times larger than some sub-Saharan African countries. In practical terms, this means it would take a Liberian worker a month to produce what an American worker makes in a day, even if they had access to the same capital equipment and materials. . . . 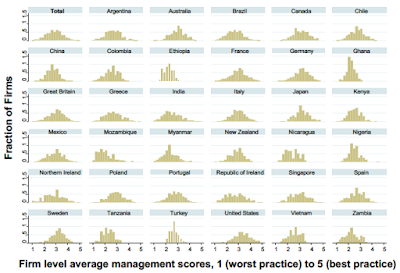 This huge productivity spread between countries is mirrored by large productivity differences within countries. Output per worker is four times as great . . . for the top 10% of US establishments compared to the bottom 10%, even within a narrowly defined industry like cement or cardboard box production (Syverson 2011). And such cross-firm differences appear even greater for developing countries (Hsieh and Klenow 2009). . . . 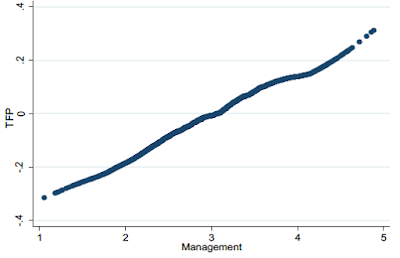 The large, persistent gaps in basic managerial practices that we document are associated with large, persistent differences in firm performance. Better-managed firms are more productive, grow at a faster pace, and are less likely to die. Figure 3 shows [thatthere is] a close correlation between better-managed firms and higher productivity. This may not be causal of course, but we also observe these performance improvements after experimental interventions ‘injecting’ these type of management practices into Indian textile firms (Bloom et al. 2013).

We performed a simple accounting exercise to evaluate the importance of management for the cross-country differences in productivity. We found that management accounted for about 30% of the unexplained TFP differentials driving the large differences in the wealth of nations.