A new study reports that judges and their law clerk's often locate outcome relevant case law that is not cited to by the lawyers in the cases before them. 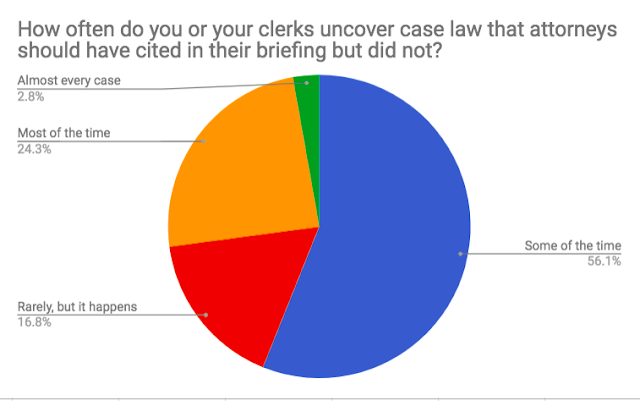 The article discussing it surmises that this is because lawyers are bad at finding case law. But, the example cited (when prosecutors didn't mention a case that caused a motion to be decided against it) and common sense, suggests that incompetence is not the only, and perhaps not even the primary, reason that lawyers don't cite to relevant cases.


The other obvious, but not mentioned, reason, is that often at least one of the side's lawyers do find a case, but don't cite to it because it doesn't support their client's position. Sometimes both sides may even decide that they won't cite to a case that is relevant because the case has statements that are harmful in one way to one side, and in another way to another side, and lawyers want cases that more purely support their client's positions.


In my own experience, judges and law clerks do find novel case law that was not located by either of the parties about one time in ten, but relevant (but not necessary controlling) case law is omitted in perhaps one out of three briefs written by a lawyer (although less often intentionally by both lawyers briefing the same issue in a case).
Posted 3:22 PM
Email ThisBlogThis!Share to TwitterShare to FacebookShare to Pinterest
Tags: Bad Lawyers, Civil Procedure, Law