Heavy armor and big slug throwers are giving way to lighter arms and missiles, many of which are primarily defensive in orientation.

Despite what the name might suggest, the "Terminator" combat support tank isn't unmanned.

They are designed as support units for "Main Battle Tanks" with a big 125mm main gun, but it isn't obvious what those heavy tanks are meant to deal with that this platform does not address, or that would not be better deal with via aircraft and longer range missiles that keep their crews out of harm's way. 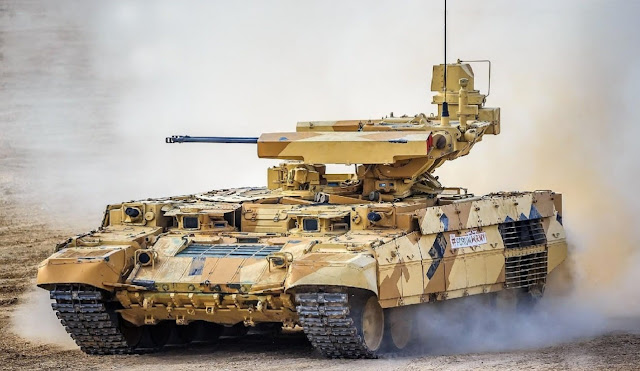 Russia has deployed its first regular unit of Terminator combat support tanks. The first Terminator company – equipped with nine BMPT-72s – was assigned to the 90th Guards Tank Division, which is stationed in the Sverdlovsk and Chelyabinsk areas of the Urals region in Central Russia, according to Russian news agency TASS. While the BMPT-72 has been tested in Syria, equipping a regular army division with the vehicles also known as the Terminator 2 – indicates that the Russian Army believes the vehicle is ready for combat. . . .
The BMPT-72 is considered a “tank support combat vehicle,” which in this case means a tank is designed to support other tanks, as compared to traditional main battle tanks (MBT). The Terminator is built on the chassis of the ubiquitous T-72 main battle tank, of which 25,000 were built since the 1970s. But instead of mounting a 125-millimeter cannon in a big turret, the BMPT-72 has a small turret armed with an array of weapons: two 30-millimeter cannon, four Ataka antitank missiles, two rapid-fire 30-millimeter grenade launchers, and a heavy machine gun.
This diverse suite of weapons allows the Terminator to engage multiple types of targets, including tanks, infantry, fortifications, helicopters and low-flying aircraft. At the same time, using a tank chassis offers the heavy armored protection found on tank hulls, as well as the off-road mobility of a fully tracked vehicle.
The genesis of the Terminator concept was the heavy losses suffered by Soviet armor in Afghanistan in the 1980s and Chechnya in the 1990s, On New Year’s Eve 1994, large columns of Russian tanks and armored personnel carriers roared into the Chechen capital of Grozny to suppress pro-independence insurgents. Ambushed by Chechen fighters armed with anti-tank rockets fired from buildings into the streets below, hundreds of Russian armored vehicles were destroyed.
This should not have been a surprise, least of all to the Russians who had ambushed German tanks in city battles such as Stalingrad. Indeed, numerous conflicts – from World War II to Vietnam and the Iran-Iraq War – have shown the vulnerability of armored vehicles bereft of support from infantry and artillery, especially in urban combat. Russian planners concluded that the solution wasn’t to use lightly armored vehicles – such as self-propelled anti-aircraft guns – for fire support. The BMPT-72 is meant to be a support vehicle with enough armor protection to accompany MBTs like the T-80, T-90, regular T-72s, and the new T-14 Armata into combat. At the same time, its rapid-fire cannon and grenade launchers can suppress infantry and anti-tank weapons that threaten regular tanks, while its anti-tank missiles can pick off enemy tanks.
The concept of a support tank isn’t exactly new. In World War II, the U.S. Army equipped some M4 Sherman tanks with low-velocity 105-millimeter howitzers for extra firepower against infantry and fortifications, while the Soviets mounted a 152-millimeter howitzer on a KV-1 heavy tank to create the SU-152 assault gun. Today’s Israel Defense Forces have the Namur, which is a Merkava 1 tank stripped of its turret, and converted into a heavily armored troop carrier.
The Terminator comes as Russia is testing the Armata, a next-generation family of armored vehicles – including a main battle tank and an armored personnel carrier – with advanced features such as an unmanned turret. One question will be whether the Terminator will be exported. Assuming it has commonality with the regular T-72, which has been used by more than 40 countries, than exporting the BMPT-72 might be easier than selling an entirely new vehicle like the Armata.

The Navy is testing a new combat system for its Littoral Combat Ship . . . Part of the effort includes an introduction of new government-furnished equipment likely intended to improve fire-control, targeting and integration across a group of ship-board weapons systems. These weapons include an over-the-horizon Naval Strike Missile, a close-in weapon system (CIWS) for near-in threats, and mid-range defensive interceptors such as SeaRAM and Rolling Airframe Missile. Over the course of many years of development, the SeaRAM missile has engaged and destroyed an aerial drone. . . This was the first shipboard firing of the new weapon. . . . the Combat Systems Qualification for LCS 19, the USS St. Louis, was recently completed by firing a remote-controlled aerial targeting with SeaRAM and only the second “full-up-display” of SeaRAM detecting and engaging from aboard the Freedom-variant of the LCS. These weapons enhancements are intended to help establish the technological infrastructure sufficient for massive LCS “survivability and lethality upgrades” planned for 2023, Kipp said.
The ship-launched CIWS uses a Phalanx gun capable of firing forty-five hundred small projectiles per minute to blanket an area; the SeaRAM replaces the gun with larger, longer-range Rolling Airframe Missiles. Unlike the CIWS, it uses a twenty-millimeter cannon to shoot down threats close to a ship. SeaRAM fires a Rolling Airframe Missile (RAM) from an 11-missile battery. . . . The Rolling Airframe Missile is what defense experts call a “fire and forget” missile, meaning it uses an RF or radio frequency detection technology along with a heat-seeking infrared sensor to find its way toward an approaching threat in order to intercept and destroy it.
Navy destroyers would likely use a Standard Missile-3, also known as an SM-3, to defend against an attacking long-range ballistic missile threat flying through space toward a target. Medium-range anti-ship missiles or sea-skimming enemy rockets could be destroyed by an SM-2 or SM-6 interceptor. Threats a bit closer could be taken out by an Evolved Sea Sparrow Missile (ESSM) or SeaRAM before a Close-In-Weapons-System strikes down approaching fire.
Arming destroyers and the Littoral Combat Ship with more lethal, precise and longer-range weapons can easily be interpreted as being part of the Navy’s larger “distributed lethality” strategy which first emerged in 2015 as part of an effort to massively arm the surface fleet. Since that time, the strategy has evolved and migrated into what the service calls “Distributed Maritime Operation,” a term which perhaps indicates that newer networking, artificial-intelligence-enabled computing and cross-domain operations. . . . the idea is to help the Navy return more fully to a focus on “blue water” combat against potential “near-peer” adversaries following a decade of ground wars wherein the Navy expended more effort on things like counter-piracy, Visit Board Search and Seizure and counterterrorism. 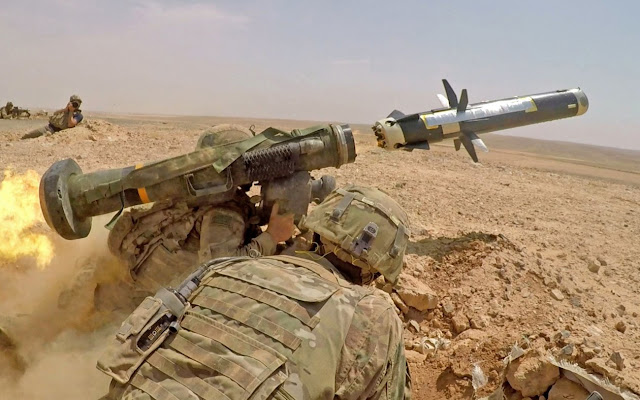 Army ground gunners recently destroyed a drone target with a Stinger missile fired from a new Raytheon-built sensor-targeting unit. . . . initially designed for the Javelin anti-tank weapon, not the Stinger.
The Stinger missile, which has a long history of hitting enemy helicopters and airborne threats, was shot out of the Javelin’s Lightweight Command Launch Unit (LWCLU) at Eglin Air Force Base, bringing new tactical dimensions to ground-based drone defense. It was a first, as it introduces the ability to leverage the new sensor, range and targeting technologies built into the LWCLU.
The development introduces new possibilities for both the Stinger and the launcher, given that when firing the Javelin the LWCLU actually doubles the range from 2.5km to 4.5km and increases ground mobility restraints for soldiers because it is 30 percent lighter than its predecessor. The LWCLU brings increased sensor fidelity and targeting image resolution as well as a “fast lock” technology for improving attacks on the move. . . . The improved sensor performance also helps bring an surveillance and reconnaissance targeting component to dismounted ground war by, as a Raytheon statement explained it, “Offering twice the sight range at night and three times the site range during the day, regardless of weather conditions.” . . . Longer range, more precise targeting also helps sustain doctrinal requirements for the Army, as enables more precise target identification to ensure the proper targets are hit. . . . An ability to hit targets at longer ranges naturally expands the kinds of targets a Stinger missile is able to hit, such as drones. The Stinger, which Raytheon data says has achieved more than 270 fixed and rotary-wing intercepts, will now be able to hit higher-flying drones and other targets previously not reachable.
A Stinger-armed infantry force can add a useful attack option to complement the existing armored vehicle-mounted Short Range Air Defense program which now deploys Stryker vehicles armed with Hellfire, Javelin and Stinger missiles for counter air missions. Now, small groups of dismounted infantry units on the move in combat, potentially operating further forward with less mechanized support, will have a much stronger sphere of defenses against enemy drones.

The Moroccan military has purchased the Israeli counter-drone system Skylock Dome. . . . these systems disrupt the connection between the flying threat and its path, taking the target out of service.
“The system is equipped with optical and thermal monitoring devices and a radar that monitors and tracks any suspicious activities. Also, the jamming devices play their role in neutralizing its danger . . . . the systems could help protect vital and sensitive installations from drones, such as critical economic, military and government installations. . . . These systems may not be very effective against military drones that are equipped with electronic anti-jamming systems, but they are very effective against drones used to take pictures inside sensitive places. . . . Morocco has been using Israeli drones for years for reconnaissance, electronic warfare and artillery targeting. Today, with normalizing relations between the two countries, the kingdom aspires to benefit from the Israeli experience in order to exploit the industrial infrastructure for civil aviation that Morocco has equipped, and to expand it to include the military side[.]"