Egypt Is Population Dominant In the Region 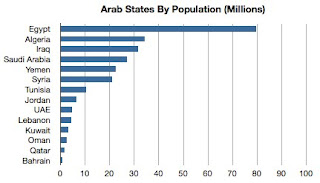 I'd planned on doing this myself, but Yglesias has already done the work.

Algeria and Iraq have experienced regime change relatively recently, making those regimes probably less prone to being displaced than elsewhere. I would also add North Sudan (a bit under 30 million), Libya (6.4 million), Morocco (about 32 million), and Western Sahara (about 400,000) to his list.

I also note that the term "Arab" as used by Yglesias is basically a political self-identifier (as in the "Arab League") and as a proxy for a significantly Arabic language speaking population, rather than ethnically Arab populations.

The populations of North Africa and Egypt respectively are mostly not members of the same ethnic group as the once nomadic people of the Arabian Peninsula, despite their strong cultural affinities to each other relative to the rest of the world. While all of these populations historically spoke Afro-Asiatic langauges, prior to the expansion of the Islamic empire (ca. 700 CE plus or minus a few decades) the North Africans spoke mostly Berber languages, the Egyptians spoke mostly Coptic languages, and the Arabs spoke Semitic languages. The Islamic empire's expansion was not a population replacing one; mostly it grew by rapidly assimilating existing populations into new languages, religions and cultures.
Posted 2:52 PM
Email ThisBlogThis!Share to TwitterShare to FacebookShare to Pinterest
Tags: culture, Demographic Change, Foreign Affairs, language, Race, Religion

Morocco is not Arab anymore? What about Sudan? I mention because they are both quite large: Morocco is roughly like Algeria, 32 million, and Sudan has like 44 million people (though it's about to lose 1/4).

Somalia and Djibuti are also a member of the Arab League but they are not really "Arab" in any meaningful way. Mauritania instead is clearly Arab but ignored in that list (smaller however).

Also, Algeria has not gone through any "regime change" since independence in 1962. Only cosmetic changes: power has been all the time in the hands of the FLN. There was a military junta in the 1990s but it was one of continuity, and so were its "elected" successors. That's why Algeria is immersed also in a revolutionary process: because nothing has changed, except cosmetically, for too long.

"The populations of North Africa and Egypt respectively are mostly not members of the same ethnic group as the once nomadic people of the Arabian Peninsula, despite their strong cultural affinities to each other relative to the rest of the world".

By language they are the same. What does "ethnic group" mean to you. One of the meanings is Arab and for that Egyptians, Mauritanians, North Sudanese, Lebanese and Peninsular Arabians are all the same.

You may argue that they were not originally the same ethnic group a thousand years ago or more. Fine. But today Egyptians are Arabs just like Andalusians are Spaniards or the citizens of Istanbul are Turks.

This is a less clear case further West, where the Berber or Tamazigh peoples are quite numerous (specially in Algeria and Morocco), or also in the case of Sudan or Iraq, which enclose major non-Arab ethnicities. But Arab Sudanese are Arab as are Arabs from Medina.

Whatever the case Egypt is the largest Arab state (by population and by much) and comparable in size and importance to Turkey and Iran. These are the large powers of the area, assuming no outsider interference.

However, Machiavelli would advise to weaken and divide them, favoring smaller and weaker princes. In fact the Arab World is today much like Italy was in the times of Machiavelli: divided and invaded by foreigners.