With all the rhetoric that the Tea Party has generated about controlling growth in government at the federal government level and in Colorado, you might think that taxes are unusually high. But, this isn't the case. Federal taxes are at a sixty year low and Colorado taxes are well below the national average.

Also, while the federal government is running big deficits, Colorado's state budget has to be balanced every year.

Federal Taxes Are At A Sixty Year Low

Federal taxes are currently a smaller share of the nation's economy than they have been at any time since 1950 at 14.8% of GDP (compared to 17.5% of GDP during George W. Bush's last year in office). CBO projections that federal tax revenue will increase ignore the extension of the Bush tax cuts and other tax cuts passed at the end of 2010. (Taxes during World War II were also much more onerous than they are today.) The average tax burden of the median family as a percentage of income is also the lowest it has been in many decades (at least as far back as 1955).

The top marginal tax bracket isn't quite at an all time low, although it is close. But, a large share of the income of the highest income Americans consists of tax exempt municipal bond interest, and qualified capital gains and dividends that are taxed at a top rate of 15%. This rate is also paid on carried interest income of private equity fund managers and the stock option income of top executives in big businesses. The 400 highest income Americans paid an average tax rate of 16.6%, down from 30% in 1995. 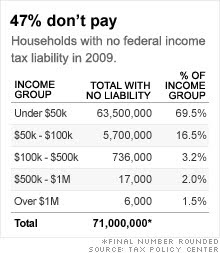 Federal estate taxes are lower than they have been in any year since at least 1934, except 2010 when they were suspended for a year. 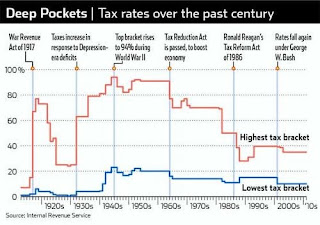 If the secret to economic growth is low taxes, our economy should be in great shape. Of course, in reality low taxes are, if anything, negatively correlated with economic growth and not closely related to it in any case, and our economy is still in pretty dismal shape.

How High Are Corporate Tax Rates In Practice?

But, what about the horrible job killing corporate income tax with a top marginal rate higher than most of our developed world peers? (The average corporate tax rate in the 34 O.E.C.D. nations is 26 percent.)

Well, it isn't as terrible as it seems. The top marginal rate on the books is 35 percent. But, most corporations don't actually pay those rates, due to a variety of tax reduction strategies.

Of the 500 big companies in the well-known Standard & Poor’s stock index, 115 paid a total corporate tax rate — both federal and otherwise — of less than 20 percent over the last five years. . . . Thirty-nine of those companies paid a rate less than 10 percent.

The corporation that owns Carnival Cruise lines pays corporate tax rates of 1.1% on its profits.

Over the last five years, on the other hand, Boeing paid a total tax rate of just 4.5 percent, according to Capital IQ. Southwest Airlines paid 6.3 percent. And the list goes on: Yahoo paid 7 percent; Prudential Financial, 7.6 percent; General Electric, 14.3 percent.

Some corporations do pay significant corporate taxes, although their average amount paid to all levels of government combined is still far below the top federal rate alone:

The average total tax rate for the 500 companies over the last five years — again, including federal, state, local and foreign corporate taxes — was 32.8 percent. Among those paying more than the average were Exxon Mobil, FedEx, Goldman Sachs, JPMorgan Chase, Starbucks, Wal-Mart and Walt Disney.

There are wide differences between industries, (see also here) with the R&D tax credit explaining a large part of that discrepency.

Germany, whose economy is generally viewed as being one of the healthiest in Europe has a top corporate tax rate of 30.18%. The only countries with higher corporate tax rates are Japan (39.54%), the U.S., France (34.43%), Belgium (33.99%) and Canada (31.32%), and many of those countries have less generous tax loopholes than the United States.

Are Colorado's tax rates high? No.

Thirty-one percent of tax filers in Colorado owe no taxes.

Colorado is one of twenty-eight states without a state level estate or inheritance tax. In 2006, there were 210 estates in Colorado (0.7% of all decedents estates in Colorado) that owed federal estate taxes. In 2011, the number will be considerably smaller as the estate tax exclusions have been increased.

Colorado's property tax rates on residences as a percentage of home value are the 39th lowest in the nation. (They are 36th lowest relative to state income.)

Colorado's corporate income tax is a smaller share of its total business tax collections than all but eight other states (five of which: Nevada, Ohio, Texas, Washington and Wyoming, don't have a corporate income tax). The combined federal and Colorado top corporate tax rate is 37.8% which is lower than every state but Alabama, Texas, Nevada, South Dakota and Wyoming. Nevada's lack of a corporate income tax hasn't prevented that state from having one of the most troubled economies in the entire United States.

Colorado's overall mix of state and local taxes is typical for the United States, and has changed very little in the last decade. This mix of taxes in Colorado is quite regressive as of October 2009:

Colorado's overall state and local tax system is regressive primarily as a result of its reliance upon sales and excise taxes. The combined effect of Colorado's income and property taxes is close to, but not exactly, flat.

Approximately what is the combined federal and state and local tax rate by income level in Colorado?

Thus, when taxes from all levels of government are considered in Colorado, the overall effect is progressive.

Media Confusion: Why the Tea Party Protest? Not High Taxes, but Government Expansion

And in particular for us original Ron Paul Tea Partiers, the movement founded on Dec. 16, 2007, the anniversary of the Boston Tea Party and when Ron Paul raised $6m in one of his supporter-initiated "money bombs", it was always about starving the federal government to stop the unjust wars and violation of civil liberties in the U.S. (These are not issues for the Beck/Palin hijacked Tea Party launched by Santelli in February, 2008.)

Starving the federal government to stop unjust wars and violations of civil liberties in the U.S. was a pretty dumb idea in the first place - one stops wars by electing people who oppose those wars and civil liberties violations are quite inexpensive in a budgetary sense.

At any rate, whatever the Tea Party started as, it has emerged as a wing of the Republican party, and one that is strongly pro-war, pro-defense spending, anti-civil liberties, and anti-non-defense spending, at least as a matter of rhetoric, whatever no true scotsman objection you may raise to that group of people and that movement.