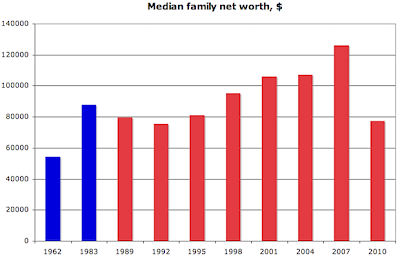 This vast loss of wealth was compounded by a loss of income, as the earnings of the median family fell by 7.7 percent over the same period.

The fact that the financial crisis would have a wealth reducing effect was apparent immediately.  The fact that it would so dramatically affect median family, rather than having a greatly disproportionate impact on the very affluent, was not.

Recovery to pre-crash levels of income, employment, and wealth continues to be something that will not happen for many, many months, although one can argue that using a bubble inflated false level of wealth from 2007 is an inappropriate benchmark for a recovery.
Posted 5:43 PM
Email ThisBlogThis!Share to TwitterShare to FacebookShare to Pinterest
Tags: Economics, Financial Crisis