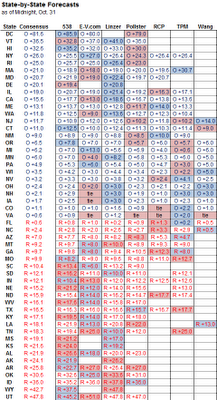 Nate Silver's 538 blog, hosted by the New York Times, is my go to site for compilations of poll data together with statistically sound analysis of what it means in the 2012 election. Silver's summary of all of that information about the Presidential race in all fifty states and the district of Columbia, as of midnight last night, six days before the election is concluded, is shown above.

The only other state leaning toward Romney that is even remotely in play in North Carolina, where Romney has a 2.4 percentage point edge. Romney leads by 7.0 percentage points in the next closest state, Arizona.

These are not the marginal states that President Obama needs to win the election, however. As Silver explains:

You can see that the various projections strongly agree with another, for the most part, in making “calls” about individual states. The only state where different sites show different candidates ahead right now is Florida, where Talking Points Memo gives Mr. Obama a nominal 0.2-percentage point lead while the others (including FiveThirtyEight) have Mr. Romney slightly up instead. There are also four states — New Hampshire, Iowa, Colorado and Virginia — in which some methods show an exactly tied race while others give Mr. Obama the lead. . . .

The marginal state is actually Ohio, which the seven analysts, including Silver, see Obama leading in by a margin ranging from 2.0 to 3.0 percentage points.

The most recent polls in a race less than a week from election day are a particularly accurate measure of what the voters will ultimately decide.
Posted 11:07 AM
Email ThisBlogThis!Share to TwitterShare to FacebookShare to Pinterest
Tags: 2012 election, blogs