Launching and Retrieving An LCS Based Drone


The U.S. military wants to build a medium-sized drone that it can fly off Littoral Combat Ship 2 (LCS2)-class ships. . .

Defense Advanced Research Projects Agency (DARPA) officials have put out a call for defense companies to submit designs for a drone that could carry 600 pounds worth of sensor equipment and fly between 600 to 900 nautical miles from its ship, according to an agency statement.

• Devising a reliable launch and recovery technique that enables large aircraft operations from smaller ships, even in rough seas;

• Designing an aircraft with range, endurance and payload comparable to emerging land-based unmanned aircraft, while still meeting the demands of the maritime environment;

• Ensuring the entire system can operate with minimal, and preferably reversible, ship modifications and minimal personnel requirements for operations and maintenance; and

• Packaging the system to fit into the limited space aboard ships.

DARPA’s program manager, Daniel Patt, compared the new UAV he hopes to develop to a falcon that always returns. Patt said he hopes to have a demonstration prototype in 40 months.

From the Defense Tech blog.

How does one manage it?

The key, I think is to launch and retrieve the drone not off the ship itself, but from a helicopter carried by the ship. 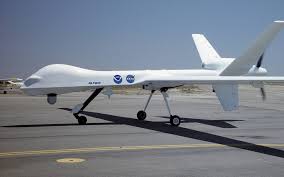 The familiar MQ-1 Predator drone is a suitable stand in for what is possible for a drone of the size class that the Navy is trying to purchase.

A Predator has has enough range (675 nautical miles) and payload (1,100 pounds) to fit the requirements. It weighs 2,250 pounds and its stall speed of 54 knots.

A modified version with wings would fold up or in for storage inside the LCS when not in use for ease of storage could be managed within the design parameters.

The LCS-2 has plenty of storage space to hold drones and related equipment for the launch, retrieval, maintenance and crew as well as living space for 35 crew members related to mission modules.


The mission bay is 15,200 square feet (1,410 m2), and takes up most of the deck below the hangar and flight deck. With 11,000 cubic metres (390,000 cu ft) of payload volume, it was designed with enough payload and volume to carry out one mission with a separate mission module in reserve, allowing the ship to do multiple missions without having to be refitted.

One Mobicon Flexible Container Handling System is carried on each ship in order to move mission containers. In addition to cargo or container-sized mission modules, the bay can carry four lanes of multiple Strykers, armored Humvees, and their associated troops. An elevator allows air transport of packages the size of a 20-foot-long (6.1 m) shipping container that can be moved into the mission bay while at sea. A side access ramp allows for vehicle roll-on/roll-off loading to a dock and allows the ship to transport the Expeditionary Fighting Vehicle.

The key, I think, it to make use of one or two of the standard two Sikorsky SH-60R/s Seahawk helicopter's that are standard equipment on the LCS-2.

The Seahawk can carry of slung payload of up to 6,000 pounds (well in excess of the loaded drone weight for a drone in this class), can operate at elevations up to 12,000 feet, can climb at a rate of 1,650 feet per minute, has a range of 450 nautical miles at cruise speed, and as a maximum speed of 146 knots (more than two and a half times the stall speed of the Predator drone). 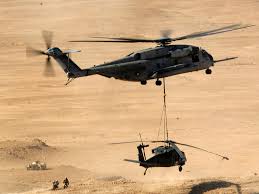 The launch system could be pretty straight forward.  First, get the drone in the air attached to a Seahawk moving at perhaps 120 knots at an altitude of a few hundred to a few thousand feet by clamps.  Then, release the retractable wings on the drone and release the clamps so that the drone would trail the Seahawk on a tow rope and fire up the drone' engines.  Then, release the tow rope holding it to the Seahawk.  The process would be similar to launching a glider, a process that almost every U.S. military pilot has encountered in the training process.  (As a footnote, military gliders were used for one way military transportation in World War II). 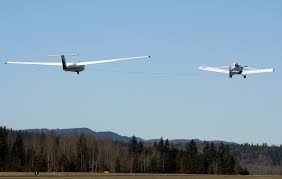 If the drone itself weighed 2,250 pounds, the detachable launch and retrieval clamp and tow rope system on the Seahawk could weigh up to 3,500 pounds. This is fairly realistic. Glider tow systems currently in use weight about 1.5 times the weight of the towed aircraft.

This is also similar in concept to a piggy back launch of an aircraft, illustrated below: 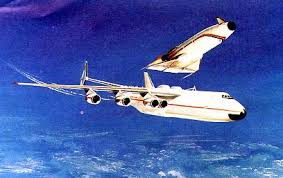 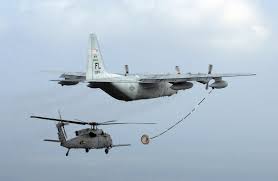 It could be retrieved using computer controlled navigation systems similar to those used for aerial refueling operations, but with the helicopter serving the drone plane instead of visa versa, to pluck it out of the air with the Seahawk could be the primary mode of retrieval.

A mid-air retrieval of a drone with a helicopter is not unprecedented.  Here is an U.S. Air Force image of this being done (caption from source): 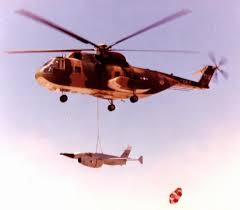 A videoclip depicting a similar drone retrieval in 1971 can be found here.  The program in question is discussed at page 25 of this book which notes that two variants of these system were used during the Vietnam War from November 1969 to June 1973.

The tow rope could first be used to hook the drone while it moved at not much above stall speed in a manner similar to a refueling hose on a specially designed hook on the drone.  Then the drone could be slowly reeled in (with computer operated flight controls in operation on the drone and synched to the helicopter to keep it on its docking course), could be clamped down and then could retract its wings before the helicopter with the clamped on drone lands.

Alternately, the final clamp down step could be skipped and the drone on the tow rope could simply retract its wings and be dangled by the helicopter onto the helipad on the ship and detached once the drone is on the deck and the line is slack.

This is the most technologically ambitious part of the concept (as explained here), but is neither unprecedented nor revolutionary.  There are patents for similar concepts that have expired and entered the public domain for such techniques.  The main difference between most historical cases of this technique and the one proposed here is that the drone is able to manuever in concert with the helicopter rather than simply falling out of the sky on a parachute.

Backup Retrieval Via Splash Landings With Removal From Sea Via Helicopter 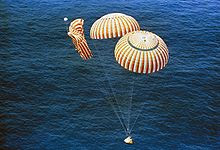 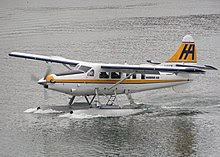 As a backup, or if plucking drones out of the air proved too technologically challenging to make work in practice, the drone could have an ability to make a splash landing, either on pontoons, or with a parachute and huge life raft type inflatable with a locator beacon to splash land (like a space capsule inbound) and then use the SH-60 in lieu of a crane to pluck it out of the water and back to the LCS.

The recon devices on the drone could be buffered against rough landings more easily than human pilots (and could even eject separately during splash landings with its own parachute-airbag-tracking beacon system allowing for a rougher landing for the rest of the drone).

Widely Adaptable To Most Naval Surface Combatants And Beyond

While simple, the launch and retrieval process would be a technical wonder that would become an iconic thing of beauty in the naval, if this approach were adopted, that would become symbolic of the Navy's surface combatant force's twenty-first century technical competence.  The system could also be relatively easily adapted to any other naval platform that carriers an SH-60 helicopter, which most naval surface combatants do.

The concept could be scaled to other helicopter models and used for Coast Guard cutters with carried helicopters and for civilan uses as well.  Nothing in the concept is inherently military.

The system could also be applied in land based applications with essentially no modification, allowing for drone operations out of forward operating bases without adequate field air strips (e.g. in mountainous or urban environments).
Posted 12:54 PM
Email ThisBlogThis!Share to TwitterShare to FacebookShare to Pinterest
Tags: History, Military, Technology