The tricky part of gerrymandering is how to measure and analyze it.

How Do Partisan Votes Translate Into Partisan Seats?


One approach to measuring the impact of gerrymandering (arguably the most direct) is to compare voters cast for candidates of each party and compare them to the number of seats won and is called the Gallagher Index. (New Zealand provides a mix of single member district and proportional representation to mitigate gerrymandering incentives and keep the Gallagher Index low). Another similar index is the Sainte-Laguë method which is closely related to the Pearson's chi-squared test. One could use voter registration or previous detailed election results for some statewide partisan contest (e.g. the most recent elections for President or Governor) to measure new maps by this means in a hypothetical election conducted by this method.


A new measure relied upon in a new gerrymandering case in Wisconsin is the "efficiency gap":

Courts have generally agreed that some partisan advantage in redistricting is tolerable, in part because voters themselves are not spread equally across a state or district by party. But the plaintiffs in the case, 12 state Democrats represented by the Campaign Legal Center, had argued that the Wisconsin remapping was among the most sharply partisan in the nation.

Their lawsuit said that in the 2012 elections for the Assembly, Wisconsin Republicans won 48.6 percent of the two-party vote but took 61 percent of the Assembly’s 99 seats. A key question in Monday’s ruling, as in past challenges to redistricting, was whether that division was unacceptably partisan, a question that previous courts have stumbled over.

“Nobody has come up with a standard to measure constitutionality — how to distinguish between malevolent, evil partisanship that’s manipulative, versus the natural advantage one party might have as a result of where voters happened to live,” said Edward Foley, the director of the Election Law Project at Ohio State University’s Moritz College of Law.

In Monday’s ruling, the court was swayed by a new and simple mathematical formula to measure the extent of partisan gerrymandering, called the efficiency gap. The formula divides the difference between the two parties’ “wasted votes” — votes beyond those needed by a winning side, and votes cast by a losing side — by the total number of votes cast. When both parties waste the same number of votes, the result is zero — an ideal solution. But as a winning party wastes fewer and fewer votes than its opponent, its score rises.

A truly efficient gerrymander spreads a winning party’s votes so evenly over districts that very few votes are wasted. A review of four decades of state redistricting plans concluded that any party with an efficiency gap of 7 percent or more was likely to keep its majority during the 10 years before new districts were drawn.

In Wisconsin, experts testified, Republicans scored an efficiency gap rating of 11.69 percent to 13 percent in the first election after the maps were redrawn in 2011.

Some experts said the efficiency gap gives gerrymandering opponents their most promising chance yet to persuade a majority of the Supreme Court to limit partisan redistricting.

“It does almost exactly what Justice Kennedy said he was looking for back in the ’80s, a clear threshold for deciding what is acceptable,” said Barry C. Burden, the director of the Elections Research Center at the University of Wisconsin-Madison.


The Washington Post's Wonkblog, meanwhile, focuses on a formula that maximizes the compactness of districts without regard to the political inclinations of the people in those districts, which it illustrates comparing the current national congressional district map to one drawn to optimize the compactness of the districts.

But, it isn't clear how a compact district mandate would measure up in terms of gerrymandering impacts by other measures. 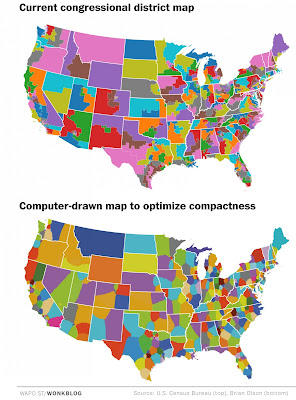 But, this approach works less well at the state level where state legislative districts are drawn by the same people who will be elected from those districts. There is no competition in that scenario.
Posted 3:16 PM
Email ThisBlogThis!Share to TwitterShare to FacebookShare to Pinterest
Tags: Election Law, Mathematics, Political Tactics, Political Theory