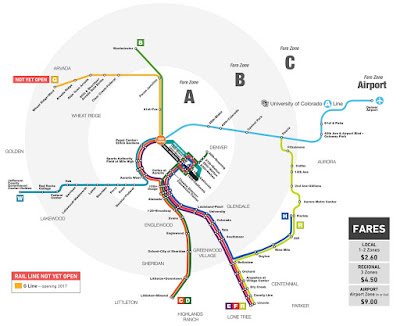 Denver's RTD Light Rail System Map including the not yet opened G line. The G line is basically ready to go, but is on hold until the glitch in the commuter rail software that also affects the A (light blue) and B (dark green) lines is solved.


The Denver Regional Transportation District's light rail R-Line opened late this morning.  R-Line trips are free until 9 p.m. today, and there are grand opening events at some of the stops.

Generally speaking, it follow I-225 from the existing 9 Mile station to I-70 at Peoria Street. The full 10.5 mile trip will be $2.60. It adds eight new light rail stations and 1,249 parking spaces at four park and ride locations. It runs every 15 minutes at peak times and every 30 minutes at off-peak times.

A previous post that puts this all in context from 2016 is here.
Posted 12:58 PM
Email ThisBlogThis!Share to TwitterShare to FacebookShare to Pinterest
Tags: Denver, Transit