The Politics of Truth 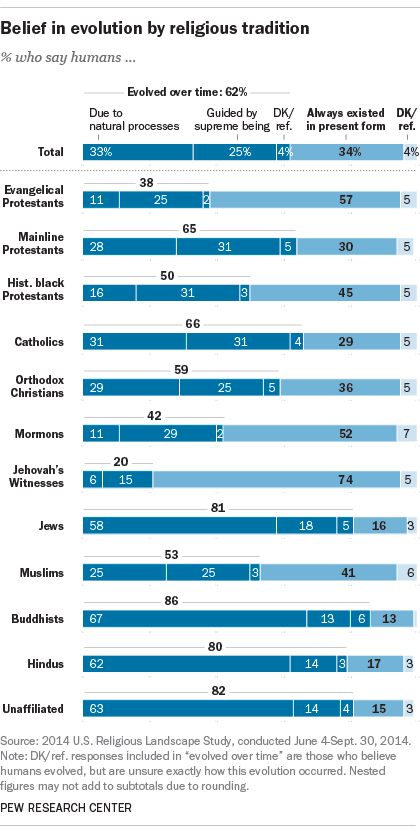 From Pew Research. Note that this is a survey of people in the U.S.  Within the U.S., Muslims, Buddhists, and Hindus in the U.S. include a disproportionate share of people who migrated to the U.S. with H1-B visa and/or work in the tech industry and investor visas. They are not necessarily representative of people in the countries from which they migrated.


Sometimes I'm am ambivalent about it. Too many people, in my opinion, try to elevate Charles Darwin to a position akin to Moses or Jesus or Muhammed or Buddha for the non-religious, or to that of Marx for Marxists. But, Darwin was just one more scientist, a giant upon whose shoulders we stand who himself stood upon the shoulders of giants to make some important insights about evolution. Just as Abraham Lincoln, whose birthday is the same day, was an important politician, but ultimately just that, an exceptional man among many, and not a god or infallible Pope.


But, I absolutely do agree that a Darwin Day is as good an occasion as any to celebrate the intellectual power of the idea of evolution which Darwin receives as much credit as anyone for developing, and to express dismay at how many people adhere, mostly for religious reasons, to utterly discredited alternatives.

You are entitled to your own opinions, but not to your own "alternative facts". But, in a democracy, no distinction is made between facts and opinions.

Would it be possible to devise a political system in which truthful facts would have a preferred position?

A system that would be deliberately biased against vaxers and climate change deniers and flouride conspiracy theorists and supply side economists and Holocaust deniers and homeopaths and the outright lies on issues from crowd side to the murder rate to the "Bowling Green Massacre" that are spewed daily from the Trump Administration.

Republicans, by virtue of having Evangelical Christians are particularly vulnerable to this, because a large part of its base, merely in order to maintain their religious faith, must routinely have psychological systems in place to reject science and reality.

This isn't to say that there isn't room in politics for conservatives. Despite the common left wing slogan that reality has a liberal basis, one can be reality based and still favor many conservative policy positions. But, if a large share of our leaders are not just conservative, but anti-reality, in the long run, our society has a real problem.

To be clear, this also doesn't mean that all issues have scientifically mandated or determined answers. The usual state of affairs in science is that there are some issues that are settled and other that are the subject of ongoing research. For example, while there are multiple proposals out there which are not inconsistent with the evidence to modify Einstein's theory of general relativity in ways that are not inconsistent with the reality (including the problem of "quantum gravity"), all legitimate physicists admit that Einstein's theory of general relativity explains reality more accurately than Newtonian gravity in a wide variety of circumstances.

Of course, the devil is in the details. How do you implement something like this? Do you change the culture of the political elite, and if so how? If not, how do you change this institutionally in a manner that doesn't repress minority but viable factual positions, but that still heavily burdens flatly disproven factual positions?
Posted 10:22 AM
Email ThisBlogThis!Share to TwitterShare to FacebookShare to Pinterest
Tags: democracy, Evolution, Political Tactics, Political Theory, Psychology, Religion, Republicans, War on Science