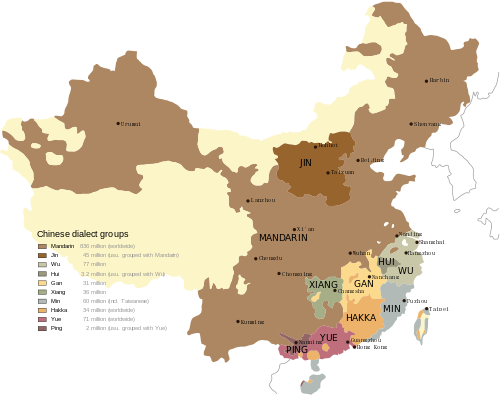 Cantonese (a subset of Yue topolects shown in purple above) is a tonal language (i.e. the tone with which you express a phoneme determines in part which word you are speaking - the number of tones that exist in Cantonese is controversial), so you can't use tone of voice to express mood - that channel already has a signal in it. Instead, you conclude your sentence with a short word known as a "final particle" (or more than one if the mood or character of the preceding sentence involves finely shaded emotional meaning). It is spoken in and around the former colonial enclaves of Hong Kong and Macau.


Spoken Mandarin Chinese (the official language of modern China), which uses mostly the same Chinese characters as Cantonese in writing, also has final particles, but far fewer of them.

This difference may be due to an Austroasiatic (or Tai) substrate influence on a Sinatic topolect ancestral to Cantonese which may originally have been more similar to Mandarin before migrants speaking this language were exposed to the substrate language.
Posted 11:16 PM
Email ThisBlogThis!Share to TwitterShare to FacebookShare to Pinterest
Tags: China, History, language