The mass of men lead lives of quiet desperation.


In “Mortality and morbidity in the 21st Century,” Princeton Professors Anne Case and Angus Deaton follow up on their groundbreaking 2015 paper that revealed a shocking increase in midlife mortality among white non-Hispanic Americans, exploring patterns and contributing factors to the troubling trend.

Case and Deaton find that while midlife mortality rates continue to fall among all education classes in most of the rich world, middle-aged non-Hispanic whites in the U.S. with a high school diploma or less have experienced increasing midlife mortality since the late 1990s. This is due to both rises in the number of “deaths of despair”—death by drugs, alcohol and suicide—and to a slowdown in progress against mortality from heart disease and cancer, the two largest killers in middle age.

From the Bookings Institute (Hat tip to this tweet).

Some of this shift is also due to the shrinking share of white men without a college education. The effects are much weaker when, for example, the least educated 25% of men are considered.

These working class Anglo men look a lot like post-Soviet Russian men in their mortality trends. The end of the Cold War, the globalization of the economy, and a transition to a more modern post-industrial economy has not been kind to either nation's working class men. 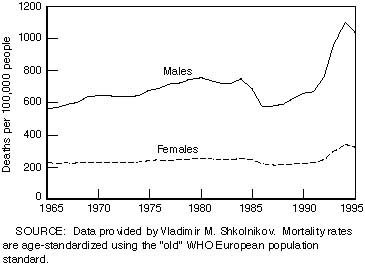 Perhaps the only genuine crisis aspect of current Russian demographic trends appears in increased rates of mortality, which have been especially dramatic among working-age men. In 1992, there was a sharp increase in deaths from nonnatural causes. By 1994, mortality rates for males between ages 15 and 64 were about twice as high as they had been in 1986 (Figure 4). Rising alcoholism and related conditions have figured prominently in this trend. In the mid-1980s, an anti-alcohol campaign championed by Mikhail Gorbachev was responsible for a brief reversal in the mortality trend, but the increase resumed after the campaign was abandoned in the late 1980s.

The tendency of President Trump's core supporters to look more favorably upon Russia and its leader, Vladimir Putin, than they used to, seems to have something more to it than their leader's personality or mere coincidence.
Posted 1:15 PM
Email ThisBlogThis!Share to TwitterShare to FacebookShare to Pinterest
Tags: Demographic Change, Economics, Education, Political Identity, Public Health, Quotes, Race, Russia, Social Class