Property Crime Down For 14th Straight Year In U.S.

The estimated number of violent crimes in the nation increased for the second straight year, rising 4.1 percent in 2016 when compared with 2015 data, according to FBI figures released today. Property crimes dropped 1.3 percent, marking the 14th consecutive year the collective estimates for these offenses declined.

The 2016 statistics show the estimated rate of violent crime was 386.3 offenses per 100,000 inhabitants, and the estimated rate of property crime was 2,450.7 offenses per 100,000 inhabitants. The violent crime rate rose 3.4 percent compared with the 2015 rate, and the property crime rate declined 2.0 percent.

From the FBI relying on Table 1 of the report for which this is a press release.

Looking at sub-components of property crime:

Burglaries and motor vehicle theft (and robberies) all net a greater average value of property stolen than simple larceny, so it is increasingly hard to earn income from property crime.

It seems plausible to me that some of the decline in the larceny rate may reflect decreased reporting as the value of tangible personal property has fallen relative to other forms of spending. Stuff that can be stolen is cheaper than it used to be and may not be worth reporting as stolen.

The 538 blog looks at the trends in murder rates, an analysis summed up in this chart: 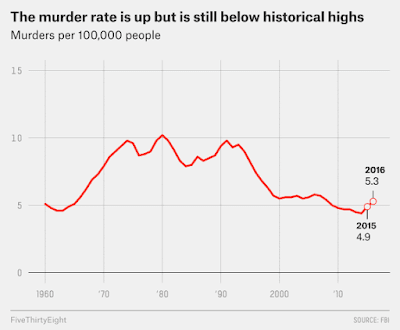 It also notes that declines since a peak around 1991 (25 years ago) have been even greater. Robbery, burglary and auto theft (all of which are big ticket property crimes) are all down more than 62% since 1991. Murder, rape, aggravated assault and ordinary theft have fallen less strongly. 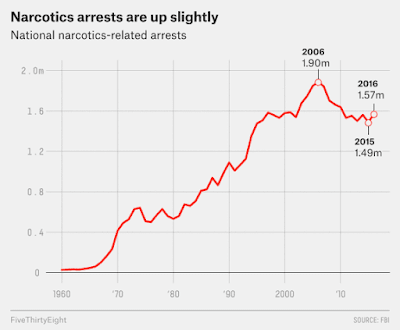 Thus, during ten years during which the rate at which people were incarcerated in state and federal prisons has fallen, property crimes rates have continued to fall steadily and violent crime rates fell for eight of those ten years.

More on incarceration and crime in a Marginal Revolution post that reports a report that the marginal crime reduction from more incarceration in the U.S. has hit zero or might even be negative.

While a couple of years of increases in violent crimes in the last two years (which other evidence suggests is mostly confined to a handful of cities) is not good news and generally speaking, we care more about violent crime than property crime, the twenty year trend in U.S. crime rates is still remarkable positive.

Despite the fact that property crime rates and violent crime rates don't exactly track each other, the trends are close enough to each other (37% v. 43% over a decade) to infer that most of the decline in crime rates has a common source (also robbery, which is classified as a violent crime and makes up about 25% of the violent crime total, is also a crime that involves property).

It also comes at a time when teen pregnancy, alcohol use and drug use are all at record lows. Fewer teens are dropping out of high school and more are going to college.

Opiate abuse (with overdose deaths), alcohol abuse, disabilities at younger ages and suicide are all up for blue collar adult men, but this apparently hasn't translated into higher crime, although an examination of the state specific data might cast more light on why other forms of despair don't seem to have produced much more crime.

Drunk driving (and traffic deaths generally), however, is down significantly.

The Economy Has Improved In The Long Run

There has been economic growth over the last 20 years, although a minor (2001) and a severe (2008) recession along the way didn't seem to increase crime rates, and most of the benefits of that economic growth has accrued to the wealthy who were already committing crimes at very low rate. Increased economic inequality has apparently not increased crime.

It has happened despite declining rates of incarceration in state and federal prisons.

Admittedly, incarceration is a lagging indicator, but we are now at 1970s crime rates, but we have early 1990s incarceration rates, and an average prison sentence is only several years. Sentences for crimes continued to get longer even as crime rates fell.

We are getting less bang for our buck from longer sentences now because early on, longer sentences put away people who would have been released before "aging out" of the high crime age bracket, while now lots of people sentences to long sentences long ago have aged out and represent a much more modest threat to the public than they did earlier, but are still incarcerated.

Deinstitutionalization of the mentally ill was one major factor that coincided with a rise in incarceration. The number of people in inpatient mental health care fell by something like 900,000 while the number of people now under criminal justice system supervision is about 800,000.

Improved medical care could explain part of the decline in the murder rate, but not the decline in other kinds of violent crimes that has happened at the same time.

Has This Reduced Property Insurance Rates?

A guide to the 2016 FBI statistics from the Vera Institute emphasizes variation in crime rates from place to place with "hyper-local" problems driving the trends this year.

These data points can be integrated with longer term crime data. This suggests that as of 2009, we were at a 100 year low in crime rates in the U.S., and probably lower than any earlier period in United States history. So, the crime rate in 2014 may be the lowest of all time in the United States.
Posted 12:22 PM
Email ThisBlogThis!Share to TwitterShare to FacebookShare to Pinterest
Tags: Crime, Criminal Justice, Demographic Change, Economics, Financial Crisis, Health Care, Mental Health