The Populations Of Leading Global Cities Over Time 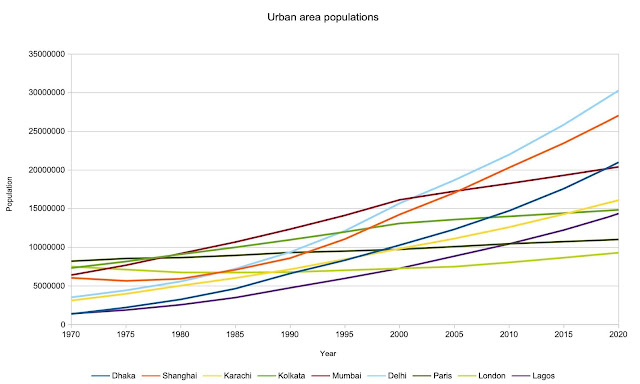 From Razib Khan at Brown Pundits.

For what it's worth some of the color distinctions are challenging to make for me without the context of knowing what the relative size of some of these cities should be. The populations appear to be urbanized area populations.

Also, to be clear, it isn't a comprehensive list of large cities in the world (this UN publication is also the source for the maps below). The chart above omits, for example, Tokyo, Sao Paulo, Mexico City, Cairo, Beijing, Osaka and Kinshasa. The blog in question is focused on South Asian and nearby Central Asian affairs and culture. The others are chosen mostly for familiarity.

Wikipedia also has a list of the largest cities in the world that uses a somewhat more uniform definition of a city's population than the U.N. list, and on that list which Tokyo is 1st in the world, Seoul is 5th, New York City ranks 9th, Osaka is 16th, Los Angeles is 18th, Moscow is 23rd, London is 29th, and Paris is 34th. No place other than these eight cities in the "developed world" make it into the top 40 on that list. 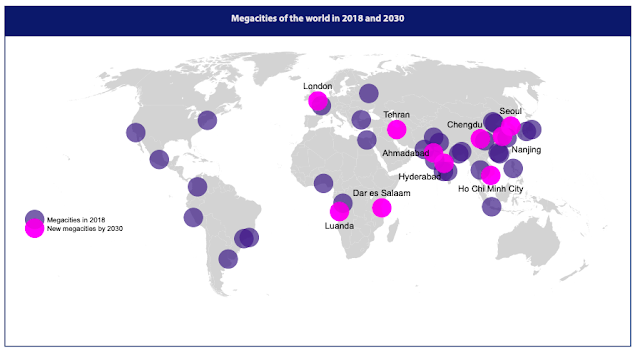 The geographic distribution of all forty-five of the world's megacities with at least 10,000,000 as of the year 2018 or will have 10,000,000 by the year 2030, is shown above (Wikipedia counts 47 of them adding cities including Nagoya, Japan, Harbin, China and Rhine-Ruhr, Germany, while omitting a few others on the UN list).

For comparison sake, in the year 2000, there were only sixteen cities in the world with more than 10,000,000 people: Cairo, Beijing, Shanghai, Osaka, Tokyo, Dhaka, Delhi, Kolkata, Mumbai, Moscow, Mexico City, Buenos Aires, Rio de Janeiro, Sao Paulo, Los Angeles, and New York City. All eight that in the Americas as of 2030 were there in 2000. Only one of the fourteen in Europe, Africa, West Asia or Southeast Asia (Cairo) was on the list. Four of the ten in South Asia were on the list in 2000. Four of the eleven in East Asia were on the list (but Japan's two are unchanged).

There were just nine of them in 1985. Probably less than half of those sixteen cities did not have more than ten million people when I was born. In 1950, during my parent's lifetimes, New York City was the only urban area with a population of over 10 million (it had a metro area population of 14.0 million people at the time). New York City's metro area probably crossed the 10 million threshold sometime between 1920 and 1930. Megacities really are something new under the Sun.

An interesting question is how long the great cities of today have continuously held major city status. In the New World, Mexico City and Lima were major cities even in the pre-Columbian era. Cairo is the oldest existing megacity in Europe, West Asia and North Africa; it has been a major city continuously for more than 5,000 years. Jericho is reputedly the oldest city on Earth (about 10,000 years old) but isn't now and hasn't for most of history been a major city. Paris became a major city in the Middle Ages, London has been a significant city for probably at least 3,000 years. Japan had no major cities more than 2000 to 2500 years ago, and realistically they're younger. China's oldest continuously major cities are older, by perhaps, a thousand years or so. Most of South Asia's major cities are less than 2500 years old, but Lahore and Karachi could be considerably older, it isn't clear to me if they were major cities back to the Indus Valley Civilization or not.

In South Asia and East Asia megacities are so numerous that they start to bleed into each other (a bit like the major cities of the Northeast corridor in the United States).

Few examples in popular culture (with the notable example of the Netflix only series Sense8) convey any sense of how much of the world lives in new burgeoning cities around the world, many of which are so new that they aren't household names despite their size. For example: Luanda (Angola), Ahmadabad (India), Tianjin (China), Chongqing (China) and Chengdu (China). 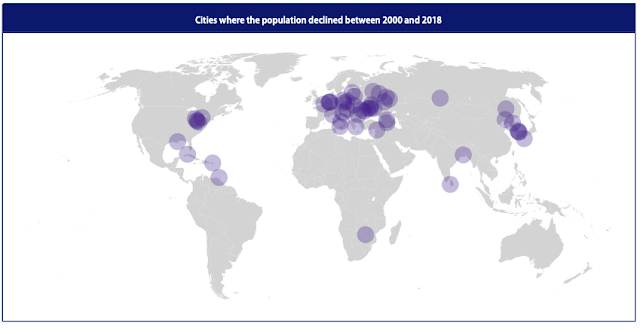 The text accompanying the map above states:


In some cities, population decline occurred in response to a natural disaster. This has been the case, for example, in New Orleans, United States, which lost population after Hurricane Katrina in 2005, and in Sendai, Japan, following the 2011 earthquake and tsunami. Economic contraction has also contributed to population decline in some places. For example, Buffalo and Detroit, both located in the United States, experienced population decline associated with the loss of industry and jobs. In most cases, however, declining or stagnating populations have been associated with persistent low fertility rates, particularly in Europe. The 52 cities with declining populations were home to 59 million people in 2018, down from more than 62 million in 2000.

The Northeast corridor and Rust Belt of the U.S., Europe, Korea and Japan are home to 44 out of 52 of them. Four more were in the Gulf of Mexico area, on was in Africa, one was in Central Asia, and two were in South Asia. This reflects not just the demographic transition associated with becoming a developed country, but the very late stages of that process.

The U.S., outside of the Northeast, and Australia, despite being developed, have thus far evaded this trend, as have "Asian Tigers" like Taiwan and Singapore.

A notable observation, the implications of which deserve more thought and analysis, is that almost all of the world's high speed intercity rail (outside of China most of which are just a few years old), and pretty much all of the leading intracity rail systems in the world, are located in areas where the populations of major cities is declining.
Posted 8:17 AM
Email ThisBlogThis!Share to TwitterShare to FacebookShare to Pinterest
Tags: China, culture, Demographic Change, Economic Development, Economics, History, New World, South Asia, Transit, transportation, Urban Planning