Divorce In The U.S. In One Chart 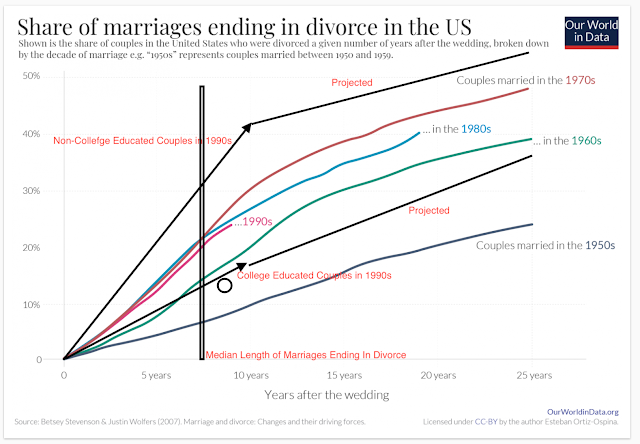 Arrows (actual) and lines (projected) with red text (apart from "1970s") are mine based upon data from a 2018 blog post at this blog. (The black circle is mine and doesn't mean anything but that I couldn't figure out how to remove it from my chart without redoing it from scratch.)

The odds of a college educated couple reaching their 25th anniversary is more than 65% and about what it was when my parents got married in the early 1960s. Their divorce rates have fallen dramatically relative to couples married in the 1970s.

The odds of a non-college educated couple reaching their 25th anniversary is roughly 45% and at an all time low. Their divorce rates have increased greatly relative to couples married in the 1970s.

This understates the actual disparity, because non-college educated women are now less likely to marry their co-parents or partners in the first place.

This wasn't true thirty years ago. As late as the 1990s, when young adults who didn't finish college (who mostly got married in the 1970s and 1980s) were more likely to have wed than their better-educated counterparts, 75 percent to 69 percent.

The average non-college educated woman has a first child before getting married, has about more than 50% chance of having a child out of wedlock, and is likely to not marry the father after the child is born. Two out of three couples had split up within five years after an unmarried birth (at least half of the time, without every marrying).

The twenty-five year time frame is not arbitrary either. This is approximately the lengthy of time it takes a couple to have one to three children and raise them to adulthood, after which the public interest and children's interest in the survival of the marriage is diminished.

My hypothesis, which is a good fit to the data, not just in the U.S., but globally, is that this is driven by economics.

The economic prospects for non-college educated men have stagnated and gotten worse since 1970s. Non-college educated women have seen their prospects in the monetary economy surge and suffer few penalties for leaving the work force for a while to focus on having kids. The fathers of these women's children are sooner or later an intolerable economic burden on the household, and marriage offers few significant economic incentives economically to these women because property division and alimony awards are likely to be negligible, particularly if the marriage is short. A waitress or retail clerk or Uber driver or yoga instructor or teacher's assistant receives little or no economic premium for job seniority.

College educated men have repeated the lion's share of economic growth since the 1970s and have profoundly greater job security. College educated women pay an immense economic penalty for leaving the work force for a while to focus on having kids, making them economically dependent upon their husbands who are economically successful, and giving them a strong incentive to marry because property division and alimony upon a divorce years later will have real value (which discourages men from leaving these marriages) in a longer than average marriage that ends in divorce. Leaving the work force entirely, or working part-time for several years, is virtually disqualifying at the top of the corporate ladder and men (as well as women who don't leave or reduce their commitment to a managerial professional career) receive a roughly 75% compensation premium for not doing so.

It is a cold analysis economic analysis, rooted in a woman's economic dependence upon her husband, of what makes marriages last and what makes them fail, but it explains the trends at the right time, even disaggregated by race and social class, and it explains, for example, the disparity between marriage patterns in the Japanese model and marriage patterns in the Swedish model.

The fact that just fifty years ago there wasn't this social class disparity argues against the hypothesis that college educated women are less likely to divorce because they are more mature and have better relationship skills. Young men and women without college degrees, by and large, having become more inept spouses and parents than they were half a century ago. They are simply facing different economic pressures.

This isn't an analysis embraced by the left or the right.

The left is uncomfortable with the notion that one contributing factor to the decline of marriage stability has been increased economic opportunity for working class women, or that one contributing factor to the rise of marriage stability for college educated women is unequal pay for their professional and managerial work. The tradeoff between economic dependence on a spouse and marital stability is a bitter pill for many on the left.

The left is also very reluctant to acknowledge that overall, on average, kids are significantly better off being raised for their entire childhoods by a stable couple, than in fragile families with complicated parenting time and parental decision-making arrangements and complicated blending families that are regularly reinvented.

The right wants to blame the decline of marriage stability on gay rights, declining religiosity, decaying morals, and race based cultural flaws, but isn't eager to point the figure at the economic inadequacy of working class men in the modern economy relative to college educated men and women. The fact that secular elites behave closer to their own ideas of marital and sexual morality than religious members of their own culture is also something they find irksome.

To be clear, I am not advocating a return to the gender relations of the 1950s, or suggesting that we can turn back the clock to create an economy better suited to non-college educated men. But you need to understand why the present is the way it is to meaningfully evaluate policy alternatives.
Posted 11:11 AM
Email ThisBlogThis!Share to TwitterShare to FacebookShare to Pinterest
Tags: Divorce, Economics, Empirical legal studies, Marriage, Parenting, Political Identity, Political Theory