Why Is A New U.S. Civil War Unlikely?

Trump has been trying to foment the seeds of a violent civil war in his followers.  A game designer, in a widely shared analysis, has even discussed four possible civil war scenarios. This is unlikely to happen.

In the big picture, an election related civil war is unlikely in 2020 in the United States because civil wars almost always hinge upon disputes over the legitimacy of the ruler and the ruler's regime. As I noted in the linked post:

People do not fight wars because taxes are too high, or they disagree with the way money is allocated in the national budget, or for any other of the multitude of public policy sins that a government can commit. Public policy issues are relevant to which contestants in a war receive support of various kinds while it is waged, and to crafting solutions that will bring legitimacy to a new regime after a war, but are for the most part unimportant in causing wars to arise.

I hate the Electoral College. It is grossly unfair. But it is also a powerful force to make succession more robust in the United States in the face of close and contested elections.

Most of the 57 different electoral vote contests will not be close. 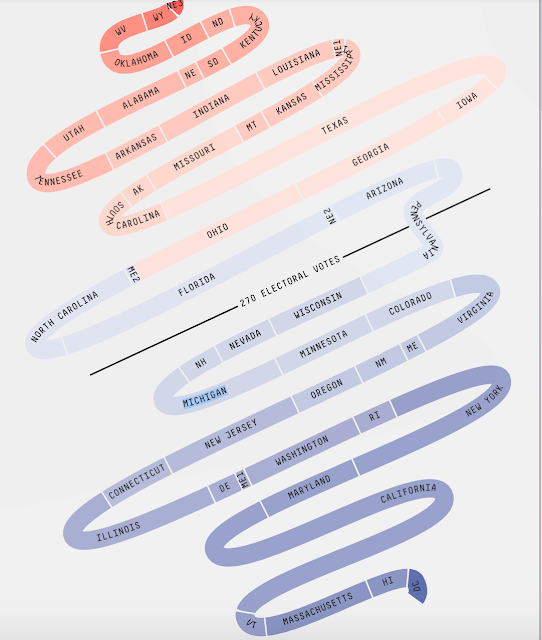 Of the 57 contests, 56 of them are in elections administered by state and local governments, and the remaining one, in the District of Columbia, is the most lopsided of all of the 57 contests. The currently projected outcome in the District of Columbia is that Biden will get 91% of the vote and Trump will get 6% of the vote. So, there will never be a contested electoral vote dispute in the only contest in the Presidential election which is administered by federal officials.

Disputes regarding election outcomes in any given one of the 57 contests are only viable if a race is close.

Even a two percentage point margin of victory is clear enough that it won't generate much controversy, and realistically, given polling and historic experience, only about one to six of the 57 contests will be that close.

Moreover, disputed elections in close races are only material if they occur in marginal contests that could determine which candidate gets 270 electoral votes.

For example, in today's polling averages of Presidential election polls in battleground states at Real Clear Politics, the states that are within two percentage points of a tie are North Carolina, Florida, Georgia and Iowa. But none of those states are likely to be necessary for a Biden victory, if Biden wins. Biden leads by 3.8% in Pennsylvania and 4.4% in Arizona, which are much more likely to be marginal states and are margins that if reproduced a few weeks from now on election day, would be too large to give rise to a plausible dispute over who won the election, even if Biden's electoral vote margin was a small one and not a landslide.

It is, of course, possible that the actual election day margin for the winner of the Presidential race on November 3 in marginal states like Pennsylvania and Arizona could end up being razor thin and produce disputed election results in those particular and pivotal states. But if voters voted on election day the way that they are leaning now with only a small shift towards Trump relative to current polling that is similar across the board nationally, the outcomes of the election in North Carolina, Florida, Georgia and Iowa aren't going to matter.

It doesn't take a landslide result for a candidate to avoid a disputed election. It just takes a 2% margin of victory or more for the winning candidate in the state that delivers that candidate his 270th electoral vote.

Usually, if the margin of victory in the marginal states is more than 0.5% there isn't a recount and the election result is clear enough. The odds of the Presidential election this year hinging on a recount, according to 538 is about 5%.

Biden leads in national poll quality weighted polling averages from 538, as of September 23, 2020 by 7.2 percentage points.

According to 538, the odds of no candidate receiving an electoral college majority and Congress deciding the election are less than 1% this year.

How Election Disputes Play Out

Even in those circumstances, where there is a disputed election, resolution of the dispute is limited to the states with narrow margins of victory that in the first instance (certainly less than two percentage points, and realistically, much closer), play out with state and local election administration officials (usually primarily a state secretary of state and county clerks who are elected on a partisan basis) conducting the count.

The mere fact that there is a clearly delineated process that is widely disseminated, even if it is arcane, in and of itself, disfavors violent action because there is a long formal process to contest in through the January after the election, a time period during which passions over unfair election outcomes that are allegedly fraudulent can cool.

And, the fact that this is mostly a state and local matter, and that it is confined to specific electoral process disputes in a handful of states, also discourages the kind of outrage that leads to violent political protests from spreading nationally, because it denies protestors a shared national level political cause.

Trump’s supporters expect two large-scale riots in the fall. One will come right after Election Day, when Trump will be ahead in the vote count. This is because we’re in a pandemic, and Republicans will vote in person while Democrats will vote by mail (in fact, several Democrat-run states mandate it). Trump will be ahead on election night if this holds. The second riot will come when the Democrats “discover” millions of mailed-in ballots which will give Biden the win, which (according to them) will be fraudulent.

Most states that conduct elections by mail-in ballot require those ballots to be received by election officials by the time that the polls close on election day. A couple of states, including Washington State, count mail-in ballots that are merely postmarked on election day. But that states that allow that are all safely Democratic states in which there will not be disputed elections.

The only battleground states this year are likely to be close and could conceivably be marginal, outcome deciding states are Florida, Maine, Arizona, Pennsylvania, Wisconsin, Nevada, New Hampshire and Michigan. Most of them have elections better administered now than Florida's was in the 2000 election.

In contrast, election officials generally don't start to tally up votes cast in person on election day until the polls close and those results tickle in over the course of election day evening and into the next day or two.

So, this year, any flip in results is much more likely to go from a Democrat who received strong support in mail-in ballots to a Republican who did better in election day polling, than the other way around.

As I've noted before at this blog, the United States, historically, has extraordinary low rates of informal street protests and strikes and violence in its democratic process.

In many countries, France to name one prominent example, national general strikes that can spill over into conflicts in the street between law enforcement and protesters are common. Many countries have long histories of politically motivated killings of candidates and political party officials.

The U.S., by and large, does not. There hasn't been a significant street protest over election results in the 20th or 21st centuries, even in close and controversial elections like the Bush v. Gore election dispute over a very close outcome in the marginal state of Florida that was ultimately resolved in an unprincipled and partisan decision of the U.S. Supreme Court.

The predominant reasons that people on the left in the United States hold in the streets protests are alleged incidents of excessive use of force by local law enforcement officials, most recently, the Black Lives Matter organized protests this year over the killing of George Floyd in Minneapolis, Minnesota, and also several other police killings like Elijah Woods in Aurora, Colorado.

For the most part, political violence in the United States is a tactic of the political right, that is usually deployed to suppress the vote (as in a recent effort by Trump supporters to scare of early voters in Virginia), not to protest the outcome after the fact.

One reason that there aren't a lot of after the fact election result protests involving national elections, is illustrated by the Bush v. Gore case. In the United States, at this moment in time, it doesn't feel like it makes sense for someone in Texas or Illinois, for example, to conduct a protest in their home state over vote miscounting atrocities made by state and local officials in Florida.

There are relatively few places in the United States where fierce disagreements with your neighbors are common, and you only get a war when there are two sides to tango. Urban areas are liberal. Rural areas are conservative. And, where it is most likely to happen, in the suburbs, zoning laws and history have created a low density environment with few places well suited to large gatherings and a culture of privacy that is ill suited to rioting and urban warfare.

There are places in the U.S. where renegade sheriffs might be inclined to cast their lot with an anti-Biden insurgency, although there are none where law enforcement would join an anti-Trump insurgency. But the only places where this would happen would be rural counties with tiny sheriffs departments that have no sway over the masses who live in urban and suburban areas in large metropolitan areas. And, if they fired a shot at state police or National Guard troops brought in to restrain them, the tiny size of their departments would lead them to be crushed and collapse in an instant.

National protests need national organization and a common demand. The biggest plausibly advanced national cause that Trump has encouraged is opposition to mail-in voting. But this hasn't triggered marches and demonstrations in advance of the election so far, and fights over election laws after the election has already happened don't make a lot of sense as a cause either. It is hard to build consensus around a demand that the double digit percentage of the electorate who actually did cast votes by mail in the most recent election, many of whom voted your way, shouldn't have their votes counted after the fact.