Why Are Red Counties Poor? 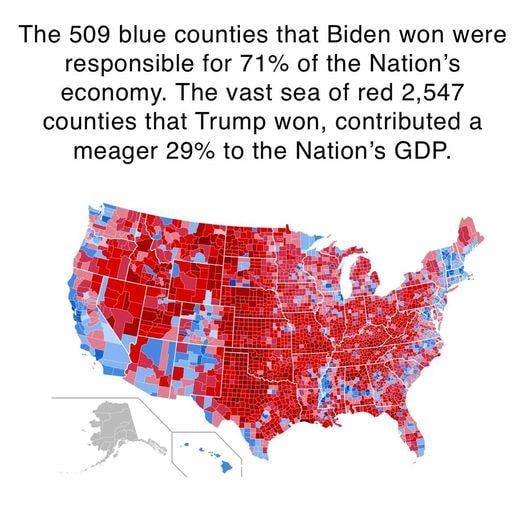 * People who live in higher population density places are more likely to be liberal.

* Per capita GDP is very robustly related to population density.

* Greater affluence and great income, economic and non-economic personal safety security are likewise factors that make it more likely to be liberal.

*  The vast majority of rural counties have had declining (or at a minimum increasing more slowly than the nation as a whole) populations for almost every decade in U.S. history since the Census was established. This is mostly because primary extractive industries (i.e. farming, forestry, fishing and mining) have become steadily more efficient over time due mostly to improving technologies. Fewer people can farm the same land while producing more farm goods as output. This is also true for other extractive industries. So, extractive industry production located in rural areas has fallen, reducing both primary employment in those industries and secondary and tertiary employment that is derivative of employment in those industries. In some cases (although not nearly so much as in manufacturing) cheaper imports have also displaced domestic production.

* Rust Belt economies are a product of a manufacturing industry employment situation that has been stagnant or declining since the 1970s. Some of this is due to offshoring where labor is cheaper and regulation is lighter that is feasible because shipping has gotten incredibly cheap. Some of this is due to increasing automation. Lots of counties that were home to a lot of union liberal manufacturing workers shifted to being red counties as manufacturing declined. the work the remained in manufacturing has been higher skilled on average than it used to be, denying opportunities to work at low skilled manufacturing to less skilled workers, mostly blue collar men without any college education.

* The Economics 101 expectation is that when employment opportunities decline in one place that people will move away from that place to someplace with better employment opportunities, bringing geographic areas into equilibrium. And, this is a thing. Rust Belt and rural areas have seen net outmigration. Economically growing urban areas have seen net immigration. This process isn't as frictionless as the theory supposes, however, and is heterogeneous.

Who stays and who goes?

* Young people with good job prospects outside the industries predominant in the places where they grew up go. People stay for lots of reasons. Retirees don't need to follow the job market so they have less pressure to move. The same is true of people receiving disability benefits.

* It is also true of people who would be unemployable at their destination if they did move (which is the flip side of the "fit immigrant hypothesis"). The people who don't move are those least likely to be able to increase their incomes commensurate with the housing cost increase they will experience at their new home. The economically unfit are those who stay.

* When people are moving out of a place because it is undesirable for some reason, such as weak employment opportunities, housing values there tend to fall. When people are moving into a place because it is desirable for some reason like strong employment opportunities and general economic productivity, housing valuers there tend to rise. The main difference between the cost of living at different places in the U.S. is due to housing costs and secondarily to differences in prices due to commercial real estate costs and labor costs that are driven by housing costs. So, there is a cost of living gap, mostly driving by a housing cost gap, between places with stagnant economies and places with healthy economies.

* This housing cost gap discourages people from moving from less prosperous places to more prosperous places unless they are likely to see their incomes surge and their employment become more reliable if they move. For people on fixed incomes like retirement money, this is a particularly strong reason not to move. It is also a strong reason for the "unfit."

* Another thing happens with homeowners. Older homeowners have often paid off their homes, so their cost of living is particularly low. They pay property taxes (which are modest relative to the value of the home, which is already low) and insurance (which is sometimes allowed to lapse) and maintenance (which is often deferred). They also, even if they have a mortgage, locked in a housing price in the form of a mortgage payment long ago.

* Of course, the longer someone has lived someplace, and the more community respect and prestige they get within local communities providing them with relative prosperity even if they lack prosperity in absolute terms, the deeper their non-economic ties to it are and the more reluctant they are to move for that reason as well.

* In farming, there are also relatively high costs of entry, not just land, but also equipment and skills and networks of business partners, which local farmers have already paid for as sunk cost, but newcomers would have to acquire at full price. Locals may be hostile to newcomers because they know that the supply of farming jobs is already scarce and declining.

* Another concept is the "right to stay put" that is implicit in many government programs and legal concepts. It isn't absolute. Whole cities can be forced to move if the government uses its power of eminent domain to condemn it, for example, to inundate it for a reservoir, or if a natural or unnatural disaster forces an evacuation. Inmates and soldiers aren't free to decide where they will move. But the exceptions to the right to stay put are few.

* You can insist on staying in the house where you grew up, even if that means you collect welfare and can't really support yourself, and it becomes very expensive to provide you with medical care, with education for you kids, with postal service, with roads, with utilities like electricity, and with telephone and Internet service, relative to the costs of providing those things to you in an urban area, where you could move much more cheaply from the point of view of people paying to provide those things which often isn't you in a welfare state. The government generally can't say, we'll cut you off from government services and protections unless you accept this bus ticket to some place where it is cheaper to take care of you. Maybe this right is too strong. The high expensive due to lack of economies of scale associated with providing rural services can be a problem.

The problem with this state of affairs is that places with declining economies, instead of sufficiently downsizing and consolidating in ways that remain functional, instead wallow in deprivation and are left without the most vital members of their former communities that were critical to their functioning. The creates counties plagued by opioid abuse, deaths of despair, unskilled men of marginal employability, substandard education and on average lacking IQ and other soft skills, with intermittent employment who can't keep stable married families intact because they are left during period of unemployment or marginal employment when they are an economic burden to their families instead of being providers. It lead to resort to crime and corruption some of the time. It leaves communities of people who are disabled and retired who are too rural to provide health care and other services to in an economically efficient way. It creates communities that can't afford to maintain their infrastructure. It leads to economic insecurity and deprivation and weakness, which lead to selfishness and distrust and lack of empathy and fear, which lead to hate and cruelty, which lead to conservatism and Republicans. It makes these counties net recipients of government funds rather than net donors.

There are some basic strategies to break this cycle, but none are easy or politically attractive.

One is to use various means to break down the frictions that keep people where they are, even those those places have more people than their stagnating and declining economies can support comfortably.

Of course, that only works well if the people who move can actually be better off where they move, which is difficult because those who stay are mostly the economically least fit, and prosperous economies may have little use for them. When they move they compete with fit immigrants from everywhere in the world, not with the unfit natives in their local communities where few immigrants move because there aren't opportunities for them there. Our society still hasn't come to terms well with the notion that some people are just never going to be very economically productive and that they need to have paths to decent lives with dignity too in our society.

We can also find ways to revitalize declining areas with new economic opportunities. This is tempting. Nobody has to undergo moves they aren't eager to make. Nobody has to admit failure. But there are serious problems with this approach too.

Economic development is very locality and path dependent. Once a path to economic growth is established, it is much easier to keep it going with all ingredients (particularly since many important ingredients are not known, not fully appreciated, or little known and not known to the people making decisions) than to establish a new seed of economic growth somewhere else. Inaccurate beliefs about why someplace is successfully economically developing or otherwise successful or unsuccessful are common place, indeed routine and pretty much, the norm.

Also, the fact that one economic industry died doesn't imply that an area is well suited for some other industry.

So, that is why red counties are poor and why it is hard to fix.

Well,, that was uplifting.

We've returned to the era where not all fairy tales are happy ones.

I don't think you've given enough consideration to on-shoring. A drive through the South and you see one car manufacturing factory after another -- to take advantage of said low-cost labor, of course. It's not wealth, but it's probably as good as those areas ever had it before.

On-shoring is real and there is some of that which can work. But we're never going to see domestic manufactured goods have the market share that they did from post-WWII to 1970, and what goes on in factories has changed a lot. It is more automated and the jobs the remain are higher skilled than they used to be.

So, blue collar workers with no college education aren't getting lots of jobs in those on-shored factories, which are going to middle skilled technicians, and high skilled managers and engineers (the later and some of the former from somewhere else), instead.

There other issue is that those opportunities are scarce. Biden had won 509 counties and Trump 2,547 counties. Optimistically, maybe 10% of Trump counties can snag an on-shore manufacturing facility and rebound a little. But the problem is still there.