Lots of People Don't Have Kids

Data on men's fertility is harder to come by than it is for women, but in 2019, the Census released its first report on the subject (using 2014 data). 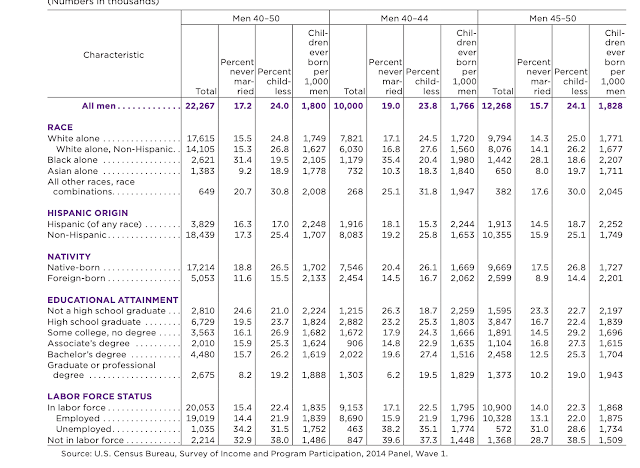 This is a relatively recent development in historical terms.

Being a childfree American adult was considered unusual in the 1950s. However, the proportion of childfree adults in the population has increased significantly since then. A 2006 study by Abma and Martinez found that American women aged 35 to 44 who were voluntarily childless constituted 5% of all U.S. women in 1982, 8% in 1988, 9% in 1995 and 7% in 2002. [Ed. 17.5% of women were childless, not necessarily all voluntarily, in 2018.]
These women had the highest income, prior work experience and the lowest religiosity compared to other women. Research by sociologist Kristin Park revealed that childfree people tended to be better educated, to be professionals, to live in urban areas, to be less religious, and to have less conventional life choices.
From 2007 to 2011 the fertility rate in the U.S. declined 9%, the Pew Research Center reporting in 2010 that the birth rate was the lowest in U.S. history and that childlessness rose across all racial and ethnic groups to about 1 in 5 versus 1 in 10 in the 1970s[.]

These figures are for men aged 45-50, however, which has the benefit of capturing nearly their full number of children per lifetime, but has the downside of being a lagging indicator. The number of children that less educated and less affluent people have per lifetime has fallen relative to more educated and more affluent people since this cohort of men had children.