Where Is The Violence In Iraq? 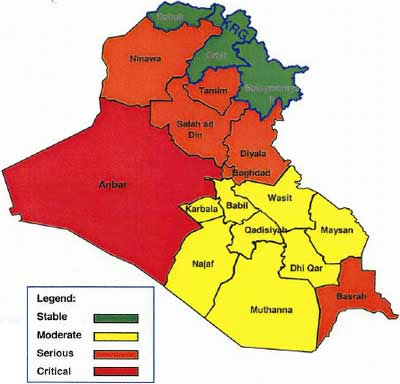 The image above is from the General Accountability Office via kos at Daily Kos and represents the situation as of March 2006. Basra is serious, rather than critical, although this is a little hard to make out in this illustration.

Bottom line: Kurdistan stable, predominantly Shi'ite provinces moderate (with Basra as the flash point which is the exception that proves the rule), diverse areas of Iraq in serious stife, and predominantly Sunni Anbar province in a critical state.

Recognizing the geographical and ethnic basis of violence in Iraq is key to identifying a workable political solution.

This data suggests that a predominantly Shi'ite Iraqi state of Sumer in the Southeast and an Iraqi Kurdistan state would be stable regimes which could manage without foreign assistance. Sumer would likely forge alliances with Shi'ite Iran. Kurdistan would likely continue on its relatively less religious, internationally independent course. As much as Turkey and Iran hate Kurdistan, they are the good citizens of post-war Iraq who have their house in order.

Given the connections between the Sunni leadership, the former Baathist regime of Iraq, and that currently in power Baathist regime in Syria, it also suggests that the best disposition of Anbar province may be to either cede it to Syria, or grant it independence, which would likely be followed by alliances with Syria. Such a move would probably rapidly transform Anbar province from being a territory in a state of critical unrest, to one that is peaceful because its people control their own destiny and would have to focus on their own economic development, rather than economic rent seeking behavior to try to get a bigger share of Iraq's oil wealth.

This still would leave a multi-ethnic, seriously strife torn rump Iraq that would probably not be capable of functioning on its own right away. It would be oil poor, but, would have water and would be brain power rich as it would include Baghdad, the urban center of Iraq. Think of this as the Bosnia-Croat federation part of the Bosnian Republic in former Yugoslavia.

Stablizing the rest of Iraq would narrow the military problems. In the areas where foreign troops leave, their departure would heighten the legitimacy of the regimes in place there because they would no longer be associated with an occupying foreign army. This would also make allocating Coalition military resources needed to get that part of Iraq on its feet more workable. There would be less territory to cover and troops could be more concentrated in trouble spots once freed to the need to provide some coverage to lower profile areas.

More importantly, insurrections are fundamentally political in origins and are a largely a function of the legitimacy of the regimes in place in the eyes of the insurgents. Just as no amount of law enforcement can completely shut down black markets in prostitution, or alcohol, or drugs, no amount of military force alone can shut down an insurgency. Unless it is in the interest of insurgents to participate in politics, they won't.

At the most crude level, democracy works because that people won't start a war to gain control when they can more easily achieve their ends at the ballot box. Insurrections with broad enough support to be a threat to a state usually also have broad enough support to win free and fair elections in a system that is not rigged against them.

But, if a state encompasses multiple politized political cultures in the same jurisdiction, they will struggle with each other. If the playing field is fairly even, as is the current situation in the United States where right wing and left wing forces with different cultural roots are fairly evenly balanced, this will happen politically. Alternately, the political situation will collapse into a dominant party system where one group always wins, and the other is forever disgruntled if they are not evenly balanced. Federalism is a partial solution to that, but there are only so many differences that can be accomodated in a single state with a meaningful central government.

Politics in a rump Iraq would probably be more successful at quelling the insurgency, than they have been within existing Iraqi boundaries.

As it stands, the Sunnis have no interest in using a political forum to air their grievances. They are at the mercy of the 80% of the country that has supported primarily Shi'ite or Kurdish affiliated political parties, so they can never win by virtue of their own political power. When you can't win a game, the logical reaction is not to play.

In contrast, in a rump Iraq, no ethnic group would have a decisive majority and Sunnis might have 30-40% of the representatives elected on a proportional representation basis. In this scenario, politics would be a viable alternative to violence. Also, because multi-ethnic parties would hold the swing votes in such a system, they might become the power brokers in a rump Iraq, which would encourage people to join them, rather than the marginal players that they are today in Iraq.

Furthermore, if a rump Iraq were highly federal in its design, with small highly autonomous cantons on the Swiss model, political buy in from potential insurgents could be even greater, because the chances that you will get at least some part of the political pie, either locally or nationally, would be enhanced.

And, if a rump Iraq had little oil, the biggest prize in the political system would no longer be there to fight over. In the absence of easy money, it would be easier for politicians in a rump Iraq to recognize the importance of using the resources they do have, which is the most educated workforce within the boundaries of pre-war Iraq.
Posted 4:02 PM
Email ThisBlogThis!Share to TwitterShare to FacebookShare to Pinterest
Tags: Foreign Affairs, Iraq, Military, Religion