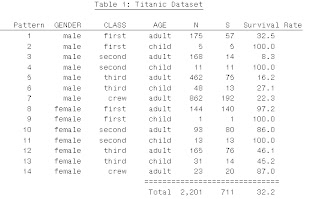 In honor of a Labor day weekend family visit to the Denver Museum of Nature and Science's Titanic exhibit, a breakdown of the survivor's of the sinking of the Titanic by gender, age and ticket class/crew status is shown above.

[According to the official inquiries] only thirteen people were taken out of the water into lifeboats; boat 4 picked up eight crewmen (seven are mentioned in the hearings by name), two of whom died; boat 14 picked up four, one of whom died.

Some people in boat 14 say that actually only three were picked up by this boat; Mr Hoyt, who died, a Japanese young fellow (actually, one of the Chinese sailors travelling third class - Fang Lang) and a young steward (Harold Phillimore, even though he is not mentioned by name). There have been suggestions that steward Jack Stewart was one of those picked up by boat 14, but his name is mentioned nowhere in either of the hearings. The alleged fourth person is not mentioned at all. Perhaps this was second class passenger Emilio Portaluppi or third class passenger Abraham Harmer, who died and was buried from the Carpathia. Perhaps there wasn't a fourth person at all...

Collapsible D picked up Frederick M Hoyt, who had put his wife into that boat and jumped into the water immediately after it had been lowered and subsequently was picked up. This is a matter of fact one has to bear in mind when reading male passengers stories about how they escaped from the ship. Many claim they were on one of the collapsibles.

Collapsible A floated away from the ship, waterfilled. During the night perhaps 20 people managed to get onto it, but many succumbed to the cold and died. Most of the survivors in the boat said there were 'ten or eleven' or 'ten or twelve' saved from the boat (Olaus Abelseth, Richard N Williams, George Rheims). This obviously limits the number of people in the boat; many would later claim they were in this boat or in the other Collapsible, B.

Boat B floated away, upside-down. According to most of those on the boat, there were between 25 and 30 on it, but 'two or three' or 'three or four' died during the night. Officer Lightoller also testified to this effect. He also said there were mainly crewmen, stokers, on the boat. There were only three passengers according to him. Colonel Gracie on that boat also suggested there were three or four passengers, the rest were stokers.

This suggests that probably no more than fifty survivors about of more than 700 survivors did not go directly from the Titanic to the lifeboats, with no time in the water, and that the actual number could have been considerably less. Almost all of those who survived in this manner were men.

Several hundred more people could have survived if the lifeboats available had been filled to capacity. The freezing water would have caused death by hypothermia within about fifteen minutes for a typical healthy person. Three hundred and thirty people kept afloat in life preservers or other support and had bodies recovered, but died from the cold; the cold also likely killed most of those whose bodies were not recovered.
Posted 1:46 PM
Email ThisBlogThis!Share to TwitterShare to FacebookShare to Pinterest
Tags: History

Actually, J. Stewart was mentioned by Seaman Frank Evans on page 677 of the American Inquiry. The relevant part of his testimony is also quoted in Archibald Gracie's Titanic A Survivor's Story.