Word of the Day: "Flowersnake" 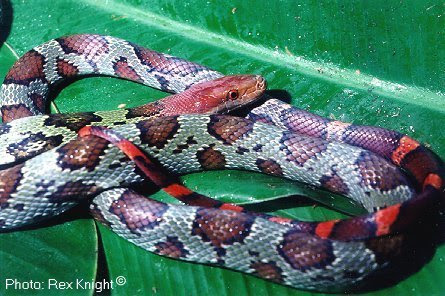 One of the boasts of Anglophiles is that the English language has more concepts which have been reduced to words than any other.

An exception to that claim is the Korean expression which is translated literally as "flower snake" (꽃뱀), possibly from the 1938 poetry collection and poem of that name by Midang So Chong-Ju, one of Korea's leading poets (but possibly a pre-existing expression used most famously by the poet). It doesn't have a simple English equivalent with the same meaning despite expressing a concept that is not particular to Korean or Asian culture. The Asian snake of that name Elaphe Moellendorfi is a large, colorful rat snake (and while rather aggressive is not actually venomous).

This source defines a flowersnake as a woman who tempts a man who looks rich into adultery and then asks for money in exchange for keeping the secret, in a country where adultery remains a crime and divorce was considered a major blow to a woman's reputation, and dates the term to cabarets frequented by married women during a modern boom for Korean construction companies in the Middle East (leaving men away from home for prolonged periods). The male equivalent is a "swallow."

It is seriously insulting to describe a woman as a flowersnake (the insult has more bite and a more specific meaning than "whore," or "temptress" for example), and sometimes semantically translated as "playgirl" but, is more accurately "venomous seductress." It refers to the kind of woman who would, for example, put a man in a situation that appears compromising and then blackmail him with it. The sense is almost psychopathic. The Sarah Michelle Gellar character in the film Cruel Intentions (1999), for example, might be the kind of person who would become a flowersnake.

I came across it watching "Country Princess" (2003) in translation (Episode 4 features an accusation that a woman is a flowersnake leading to a run in with the police in Seoul), and looked around the internet for some corroboration regarding its meaning.
Posted 2:00 PM
Email ThisBlogThis!Share to TwitterShare to FacebookShare to Pinterest
Tags: Crime, culture, Feminism, Korea, language, Marriage, Psychopathy

Oh thank you so much, I was looking everywhere about its meaning!

I like watching Koren TV series, and am currently watching "Cheongdam-dong Alice". They actually give an English equivalent to the word as "gold-digger"

Not a bad choice if you are looking for a closest equivalent in idiomatic American English.