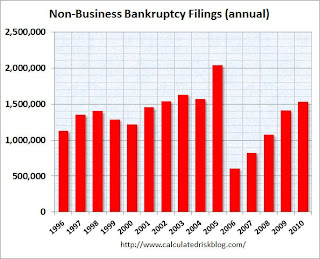 The Bankruptcy Reform Act of 2005 made significant, predominantly pro-creditor and anti-debtor changes in the bankruptcy law. There was a surge in filings before its enactment by debtors seeking to benefit from the pre-reform rules, followed by a slump in filings, partly due to people who had filed sooner than they otherwise would have and partly due to the reduced attractiveness of the new law. But, consumer bankruptcy filings were up 9% in 2010 to levels near their pre-reform peaks. In all, there were 1,530,078 consumer bankruptcy filings in 2010. This is roughly triple the number of filings in the year after the new bankruptcy law was adopted.

The growth breaks with trends in past years where the number of consumer bankruptcy filings has closely tracked aggregate consumer debt levels, while business filings have tended to more closely track recessions themselves. Consumer debt levels have been shrinking markedly compared to a year ago, but consumer bankruptcies are up substantially, long after the timing effects of the pre-enactment surge have vanished.

The growth in bankruptcy filings may, in addition to economic hard times, reflect the reality that bankruptcy law firms have started to adapt to processing bankruptcy petitions efficiently under the new law, and that the word has gotten out that for moderate income families who have always made up the bulk of consumer bankruptcy filers, that the changes in the new law are not all that much more onerous than under the old law.

The consumer provisions of the bankruptcy reform favored secured creditors and lessors relative to unsecured creditors, required five year long Chapter 13 repayment plans for most middle class debtors, tightened a number of loopholes (luxury purchase rules and homestead exemptions, for example) used mostly by more affluent debtors, required more paperwork, and made many kinds of debts previously dischargeable in Chapter 13 into non-dischargeable debts. But, it didn't fundamentally change the incentives to file for bankruptcy or not, for the average consumer debtor, other than simply making the process somewhat more expensive.
Posted 9:31 AM
Email ThisBlogThis!Share to TwitterShare to FacebookShare to Pinterest
Tags: Bankruptcy, Economics