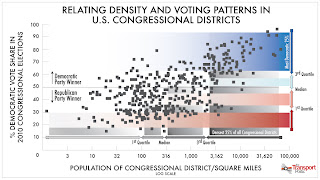 Chart from here, which goes on to explain:

This is a pretty intense urban-rural divide. Shifts like those in Colorado which transferred rural Congressional Districts 3 and 4 from Blue Dog Democrats to Republicans no doubt made it more intense.

I also suspect that further analysis would show that if you were took take more fine grained data, for example, census tracts, that average population density in a district would match the partisan split even more strongly. In other words, it is possible to have a large Congressional district in which most of the voters live in a densely populated central city or two, and a minority of voters live in outlying areas around the cities that house most of the people in the district. My expectation is that geographically large Congressional Districts in which most voters are crammed into central cities but there are large, barely populated outlying areas are more liberal than geographically large Congressional Districts with a steady low level of population densities (e.g. districts that have only small towns, rural areas and exurbs).

One important caveat is that I am not at all sure that this relationship holds in all U.S. regions. In the South, partisan divides based on race and religion may swamp most population density effects, while in the North, I suspect that racial and religious divides merely reinforce the population density effects. There are many rural blacks in the South and few in the North.
Posted 2:36 PM
Email ThisBlogThis!Share to TwitterShare to FacebookShare to Pinterest
Tags: Demographic Change, Political Identity, Race, Urban Planning

Or people's political ideals influence their choice of housing, rather than vice versa.

Why are centrist Republicans "moderate" but centrist Democrats are "conservative"?

Usage convention, no more and no less.