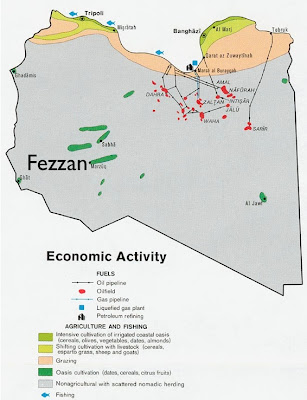 As shown on the map above, from here, Tripoli, which is still controlled by Gaddafi's regime for the moment, in not connected to the main oil resources of Libya, which are found in the "Liberated" area of Libya. International asset freezes of the sovereign wealth of Libya in Western investments, and of the assets of Gaddafi and his close associates, further deprives him of financial resources, as does the reality that no international banker in his right mind would lend money to Gaddafi or his rump regime. NPR notes that oil shipments to Chinese tankers out of Benghazi in the East, which is rebel controlled, have already resumed.

Neither the Fezzan oasis societies, which apparently remain loyal to Gaddafi, nor the economic output of Tripoli, are at the heart of the economic lifeblood of Libya. It is a relatively pure version of a petrostate. Indeed, from the perspective of liberated East Libyans, if Tripoli remains under Gaddafi's thumb, this is all the better for them because they don't have to share their oil wealth with as many people.

A modern day emirate of Tripoli, without Libya's sovereign wealth, without oil money, and without political allies in either Benghazi or Tunisia, would rapidly deteriorate into something more like Somolia than an equal part-successor to Libya, perhaps even reverting to Somolian style piracy of the Mediterranean sea trade (as it did in the era of the Barbary pirates) until put down by regional navies. Indeed, Libya's last monarch, King Idris, ruled an emirate centered around Bengazi before he joined it in a personal union to the one centered around Tripoli. The two have been united only since the 1920s, about a decade before oil was discovered.

As suburban Tripoli encircling the central city appears to have already escaped Gaddafi's control, and his apparently delusion public front about the degree of control he has over his nation, one plausible outcome of the situation in Libya might be for Gaddafi to retreat to loyal territory in the Fezzan, perhaps anchored to the Mediterrean by the city of Sirt between Tripoli and Benghazi, in a rump Libya.

Historically, the area now known as Libya was regarded as three separate regions: Tripolitania in the northwest, centered on Tripoli; Cyrenaica in the northeast, focused on Benghazi; and Fezzan in the southwest, anchored by a few scattered oases.

Given the opportunity, I suspect that the people of Mediterranean Libya would willingly cede the name "Libya," the territory of the Gaddafi loyalist Fezzan, and even a hefty share of the nation's $30 billion sovereign wealth and the personal wealth of Gaddafi and his associates, in order to avoid a prolonged and bloody civil war. The Fezzan might even declare Gaddafi to be their King, an absolute one, which is a prize he would probably value more than riches, and confirm his son as Crown Prince. Without the ongoing source of funds to maintain a potent military form oil or a modern urban hub, the Fezzan would fade into obscurity as minor agricultural state of North Africa on a par with Chad or the Central African Republic, sustainable only by virtue of its sovereign wealth. Then again, perhaps he can succeed where the Egyptians in their similar Toshka scheme to grow crops in the desert have thus far only stuggled.

The Libyans on the coast might rechristen themselves the Federated Republics of Tripoli and Cyrenaica and might even reinstate a constitutional monarch who can trace roots to King Idris. There are currently two pretenders to that abrogated throne, so perhaps one could be a monarch of a Federal Republic of Tripoli, while the other could be a monarch of a Federal Republic of Cryenaica, bound together in a federation and defusing conflicts over succession in the fragile new regimes. Were one thinking expansively, one could even imagine that federation expanding to include the new post-dicatorship Tunisian Republic as well.
Posted 6:35 PM
Email ThisBlogThis!Share to TwitterShare to FacebookShare to Pinterest
Tags: Economics, Foreign Affairs, History, Political Theory