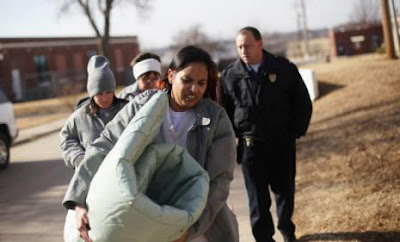 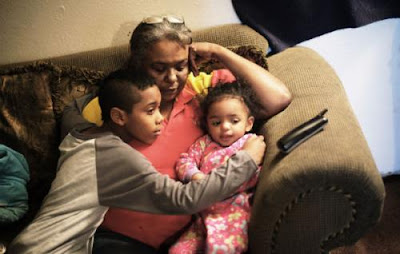 On Dec. 31, 2009, [25-year-old Patricia Marilyn] Spottedcrow and her mother, Delita Starr, 50, sold a “dime bag” of marijuana to a police informant at Starr's home in Kingfisher, court records state. Starr handled the transaction and asked her 9-year-old grandson — Spottedcrow's son — for some dollar bills to make change for the $11 sale. Two weeks later, the same informant returned and bought $20 of marijuana from Spottedcrow.

The two women were arrested for drug distribution and because Spottedcrow's children were in the home, an additional charge of possession of a dangerous substance in the presence of a minor was added. “It just seemed like easy money,” said Spottedcrow, who says she is not a drug user but has smoked marijuana. “I thought we could get some extra money. I've lost everything because of it.”

The women were each offered plea deals of two years in prison. But because neither had prior convictions and the drug amounts were low, they gambled and entered a guilty plea before a judge with no prior sentencing agreement.

Starr received a 30-year suspended sentence with no incarceration, but five years of drug and alcohol assessments. Spottedcrow was sentenced to 10 years in prison for distribution and two years for possession, to run concurrently. She will be up for parole in 2014.... In addition, Starr was fined $8,600 and Spottedcrow $2,740.

From here via the Sentencing Law and Policy blog.

This Oklahoma case illustrates very clearly the insanity of this approach to non-violent drug cases. The case also screams racism in the exercise of discretion in the criminal justice system. Here is how the judge justified this to herself:

Former Kingfisher County Judge Susie Pritchett, who retired in December, said "the women were conducting an extensive operationand included children in the business."

"It was a way of life for them," Pritchett said.

"Considering these circumstances, I thought it was lenient. By not putting the grandmother in prison, she is able to help take care of the children."

A presentencing investigative report prepared by the Department of Corrections rated Spottedcrow's risk of re-offending as "high"and recommended substance abuse treatment while incarcerated.

"It does not appear the defendant is aware that a problem exists or that she needs to make changes in her current behavior."

Spottedcrow was unemployed and without a stable residence when arrested, the report states. The family lost their Oklahoma City home for not paying bills.

"When she needed money this is the avenue she chose rather than finding legitimate employment," the report states. "The defendant does not appear remorseful and she makes justifications for her actions."

Only if there are other more serious circumstances is a first-time drug offender sent to prison, she said.

"When kids are involved, it's different," Pritchett said.

"This was a drug sale. When I look at someone in front of me, I'm thinking, 'What is it going to take to rehabilitate this person?' We look at their attitude and other factors."

When Spottedcrow was taken to jail after her sentencing, she had marijuana in her jacket. She pleaded guilty to that additional charge Jan. 24 and was sentenced to two years in prison and fined nearly $1,300. That sentence also will run concurrent with her other conviction.

Does the judge actually seriously believe that she's done these kids a favor?

Spottedcrow has four children ages 9, 4, 3 and 1 and is determined to keep her 8-year, common-law marriage intact. "It's been really hard on my husband,"she said. "I know a lot of things can happen, but he'll always have my back and be there."

Her son is aware of what has happened, but the girls have been told their mother is away at college.

"I missed my daughter's fourth birthday, and I'll miss her fifth one too. My other daughter just started talking, and I'm not there to hear her,"Spottedcrow said.

"My baby woke up and doesn't know where her mommy is. This is the hardest thing to do, and know I can't do anything about it. I just have to focus on myself and take it day-to-day and plan for going home. I will want to see my kids at some point. I'm trying to take this slow. I can't get depressed about it."

This is outrageous. My jaw dropped when I read what this a-hole judge handed out as "justice." I am a lawyer in New Jersey and this would never happen in my state. Is there any possibility of an appeal based on cruel and unusual punishment?

I know first hand this former judge is a crook. She's opened a law practice in Kingfisher and sends out threatening letters to local business in the area. She sent one to my business threatening to sue if I didn't pay up for something she didn't even understand. Instead of advising her client to research her claim, she just automatically sent out the threatening letter. I'm assuming she thought she could scare me and make some easy money. Not gonna happen! When my lawyers confronted her and requested her clients records, she didn't respond. These crooked lawyers like Pritchett should be punished for sending threats to people without some kind of proof. She needs to understand her actions can hurt a lot of good people. I have no doubt she's a crook looking for a way to make some easy money.

Same thing happened to my son, who is a white 23-year-old. Got 10 years for marijuana found in his apartment on someone else because he had a prior conviction at 18 from this woman. SO she gave him 10 years. I sure wish I knew how we could fight this. Paying a lawyer won't help. All her cases need to be looked at and reviewed! No wonder we have such prison overcrowding in this ridiculous state.

omg! i wish you would come forward and talk about that threat letter at my uncle's commutation hearing in august.and the mother about her son... my uncle got life without parole from pritchett back in 94. for drugs. he said he watches murderers and rapists and child molesters come and leave before him.........SERIOUSLY PEOPLE!!!!! you all know that is not right at all. his real crime??? being black! owning a successful business that brought more black people into our town of kingfisher!!!!!!!!!!! PLEASE SPEAK UP!!! things don't change on their own!!!! we have to stand up and do something about it!!