Some miscellaneous physics rumor and news via Lubos Motl.

[M]asses below 114 GeV are excluded by direct searches by LEP, the European collider who lived in the same tunnel as the LHC before the LHC bought an apartment over there. Indirect precision measurements exclude Higgses above 185 GeV. . . . At the 95% confidence level, they may exclude the interval of 157-173 GeV; at the 90% confidence level, they exclude the whole 156-183 GeV or so. With the less demanding 90% standards, only a tiny interval 183-185 GeV is left over there and it's very likely that the Higgs isn't hiding there. (Previously, the allowed island was 175-185 GeV or so, so the island has been mostly submerged.) This approximately leaves the 114-156 GeV interval. . . . a Higgs below 120 GeV is getting more likely - by a factor of 3 or more - than a Higgs above 120 GeV.

Re Composite Leptons (i.e. subcomponents of electrons and neutrinos):

A D0 and CMS experimenter . . . has claimed, during a CERN video press conference a week ago, that the CMS has produced something that would really shock me and most others - namely the evidence of the compositeness of leptons.

If that's true, then whoops. It would be a spectacular discovery that would be very likely to kill GUT theories as we know them - and many other related paradigms. Please, try to understand that the rumor is pretty likely to be false; it's not even clear that the . . . physicist meant what it seemed to have been, and . . . there are many other places where your skepticism may get healthily incarnated.

The DZERO experiment has been looking for evidence to put experimental limits on the scale of composite components of leptons for some time. A summary of its most recently announced findings on the matter appear in the chart below: 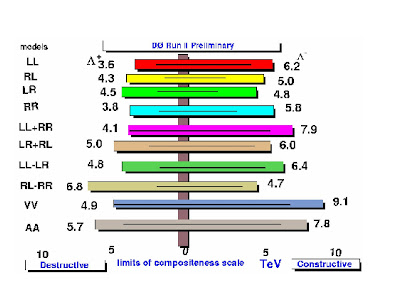 The latest limits on composite quarks from CMS were reported in January.

There is also scuttlebutt from Resonaances:

The ATLAS research project at LHC has detected a possible new particle with a mass of 7 GeV, but the significant of the signal is modest enough at this point that it could simply be a statistical fluke in the data. Direct dark matter particle searches in astronomy have been suggestive of a possible dark matter particle of that mass, but not very definitive. The mass would be about right for a SUSY neutralino, although many other candidate particles are also possible.

Re MSSM at LHC:

Also (from the same link) LHC data is continuing to disfavor the minimal supersymmetric model version of the Higgs boson, in which "[a]part from the Higgs boson there are 2 additional electrically neutral scalar particles" as the data are not a good fit for the two additional electrically neutral scalary particles, although non-MSSM models with three Higgs bosons could still fit the data.
Posted 11:01 AM
Email ThisBlogThis!Share to TwitterShare to FacebookShare to Pinterest
Tags: Physics