The Sociology of Brain Disorder Treatment

There are two medical specialties that deal with brain disorders and conditions. One is neurology. The other is psychiatry. Where does one draw the line between the two?

Neuroskeptic compares the number of articles on particular conditions in leading academic journals for each specialty (Neurology and the American Journal of Psychiatry), to look empirically at how the line has been drawn within the medical profession. 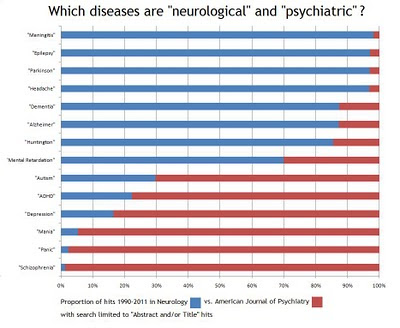 The division doesn't seem to be very strongly linked to the extent that a condition is biologicallly based. As he notes:

Schizophrenia, which is probably considered "the most neurological" psychiatric disorder, is in fact the least talked about in Neurology.

This explains the mental retardation v. autism divide, for example. While both have a cognitive function element, explaining the neurological interest in both conditions, what distinguishes an autism diagnosis from a mental retardation diagnosis that is not autism is the diagnostic and treatment focus on how autism affects personality, social interaction and empathy, particularly in the case of autism spectrum disorders like Asperger's, where IQ is often in the normal range.

The gray area for ADHD, likewise, can be explained as a product of the lingering ambiguity over whether to think of the condition as a personality disorder that is a cogential part of who someone is, or as a developmental disorder of something large is part of a larger cognition process.

Psychaitry is concerned with "who you are" while neurology is concerned with "what you are" even though there isn't obviously any fundamental difference between the kind of brain functions that lead to schizophrenia and those that lead to congential epilepsy. The looming question behind Neuroskeptic's post is whether the divide says more about perhaps unfounded biases about mental health that pervade even the supposedly enlightened medical profession, than it does about science.

There are other ways to see the distinction, of course. One is that neurologists deal with issues that are believed to be exclusively "hardware" issues, while a core issue for psychiatrists is to parse "hardware" from "software" issues and address each appropriately. Some conditions may not neatly fit that divide today simply because historical ambiguity led a condition to be assigned to one category or the other, and given that all of the physicians involved have a similar allopathic medical background and training, there is no compelling reason to upset the apple cart of institutional and funding and bureaucratic arrangements based on the distinction at this point, even if it isn't terribly logical.

In the same way, no one is urgently pushing to have responsibility for counterfeiting enforcement removed from the duties of the United States Secret Service even though this doesn't logically have much to do with is primary responsibility to provide bodyguard protection to the President and other senior federal officials and candidates, because the skill set for the two tasks is similar.

Still, the divide has a strong impact on treatment modality. Neurologists use drugs and sometimes surgery, while seeing little place for therapy. Psychiatrists, while also prescribing drug treatments, recognize the value of psychological talk therapies as a complementary treatment modality to a much greater extent.

A footnote to the post in the study is also interesting: