WIMPs Very Weakly Interacting Or Not So Massive

Sean at Cosmic Variance summarizes the latest findings of the Xenon 100 experiment's effort to directly observe dark matter better than any other account that I've seen so far.

What Is Dark Matter?

Dark matter is a hypothetical collection of non-luminous, non-baryonic matter particles that can explain why objects we observe with telescopes don't behave the way that they would if matter were distributed proportionately to the matter we can see with telescopes and only gravity as we understand it with Newton's law and General Relativity, governed them.  Plain vanilla ordinary matter doesn't behave in ways that could explain all the the dark matter that we infer exists from the way that objects in our telescopes behave.

There are various proposals for what kind of particle dark matter might be, with WIMPs (weakly interacting massive particles) being among the most popular.

The First Round of Xenon 100 Results

Xenon 100 was an experiment designed to directly detect WIMPS, but so far, it hasn't seen any.  Instead, it has ruled out a large swath of properties that hypothetical WIMPs could have that would have caused them to be detected by this experiment. 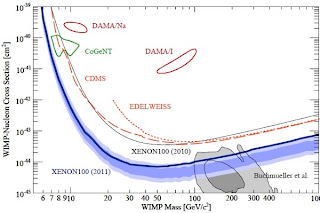 Here we see the usual 2-dimensional dark matter parameter space: mass of the particle is along the horizontal axis, while its cross-section with ordinary matter is along the vertical axis. Anything above the blue lines is now excluded. . . . That grey blob in the bottom right is a set of predictions from a restricted class of supersymmetric models (taking into account recent LHC limits).

The kind of SUSY motivated WIMP proposed by Buckmueller, et al. with a mass on the order of 150-250 GeV and very lower levels of interaction with normal matter is not ruled out by Xenon 100, nor are more strongly interacting particles with masses of under 6 GeV.  But, the Buckmueller proposal will be threatened as the Xenon 100 data set gets larger over the next year or two.

The Difficulties and Attractions of Lower Mass WIMPs

The lighter a proposed WIMP is, the harder it is to come up with a particle creation theory that explains how there could be so many of them in the universe, despite the fact that we haven't observed them yet.  The lighter a particle is, the more prone it is to be created in a high energy particle accelerator experiment.  Yet, already observed weakly interacting particles, like the three types of neutrinos known to exist, with their currently estimated masses, produced in the ways that we are aware that they can be produced, don't seem to be large enough to account for the quantity of dark matter that astronomy tells us should be out there if gravity works the way that we think that it does.

We have observed lots of ordinary standard model particles with masses in the range from 0.0005 GeV to 91 GeV (the electron, the up quark, the down quark, the muon, strange quark, charm quark, the tau, bottom quark, the W particle, and the Z particle), and in a few cases we have observed a particle that is strongly interacting and strongly theoretically motivated, the top quark, with a mass of about 168-192 GeV.  Thus, while it wouldn't be impossible for a weakly interacting light dark matter particle to be missed, that particle would have to have some pretty unusual properties to escape even indirect detection as a result of missing matter in high energy particle physics experiments that have been conducted so far.  So, detecting a not all that weakly interacting light dark matter particle with a mass of less than 10 GeV or so, is less plausible that the chart would suggest.  We have no reason to think that any particle of that type that is electro-magnetically charged or interacts with the strong nuclear force exists and we have good reason to be highly skeptical that any particle of that type heavier than a tau neutrino that interacts with the weak nuclear force exists.

A discovery like that would be a bit like discovering a new species of insect in Washington Park.  Not impossible if you looked at it in some way that nobody had previously considered, but unlikely given how carefully and regularly that plot of real estate has been examined, sometimes by people with considerable expertise who admittedly weren't really looking for it in particular.

The most strongly theoretically motivated hypothetical particle with properties that would fit the light end of the mass range is the "sterile neutrino" (a heavish neutrino that differs from ordinary neutrinos in that it doesn't interact with the weak nuclear force as regular neutrinos do, perhaps because it is "right handed").  The latest conference on neutrino physics provided indications from a couple of lines of evidence that there might actually be more than the three known flavours of neutrino in existence (perhaps four or five), boosting the attractiveness of this kind of dark matter candidate.  But, none of the hints that there are more kinds of neutrinos out there so far are definitive enough to proclaim that they have been discovered.

None of the experiments in place to directly observe dark matter could detect a weakly interacting dark matter particle that is this light, and has properties that have caused it to evade detection so far in high energy physics experiements.  This kind of particle will become one of the most likely dark matter candidate by process of elimination if the Xenon 100 experiment fails to find any sign of heavier WIMPS before it is ended.

The alternative of a heavy SUSY dark matter particle is attractive because SUSY predicts lots of additional particles, the lightest of which would be expected to be stable, and some of which wouldn't be strongly interacting with ordinary matter.  One of the more common proposals for a lightest supersymmetric particle is called the neutralino, by SUSY predictions are rather fuzzy about the precise masses of the particles it predicts, even though it predicts their other properties very exactly.  Several other SUSY predicted particles are also candidates for a lightest supersymmetric particle.  A heavy SUSY dark matter particle is also attractive because if it is heavy enough, current experiments wouldn't have detected it enough because they didn't have enough energy to create one or observe its indirect effects.

Both the large hadron collider (LHC) and Xenon 100 have a good chance of finding a heavy SUSY dark matter particle of the kind suggested by Buckmueller, et al. in the next few years if one is out there to be found.  If no particle is observed in the hypothesized mass and cross-section range in the next few years in these two experiments, SUSY itself becomes harder and harder to justify as an experimentally plausible extension of the Standard Model, because some of the phenomena that SUSY exists to make neater and tidier are mass scale dependent, yet also have to be heavier than anything that we've produced in high energy physics experiements so far so as not to contradict existing experimental data.

A heavy SUSY WIMP so close to being discovered or disproved, in part, because it would be similar in mass to the long sought after Higgs boson that the LHC was designed to discover (although probably a bit heavier).  Metaphorically, this means that it is on the fringe of a part of the universe upon which we are shining the brightest spotlight that humanity has ever had to look for something else that should be in the same vicinity.

SUSY is just a theory motivated by the ugliness of the Standard Model, but the Higgs boson is something we currently assume to make the Standard Model, which we used every day to make detailed and superaccurate predictions work.  It is the only missing piece of an already tremendously successful theory of physics.

If a SUSY WIMP isn't found, we have to conjure up some other way source of dark matter effects and have to give more credibility to the possiblity that the laws of physics are fundamentally ugly and arbitrary.  If a Higgs isn't found, we have to rewrite the laws of physics we use today.  We should have much better answers to both of those questions before my tweens go to college.
Posted 6:00 PM
Email ThisBlogThis!Share to TwitterShare to FacebookShare to Pinterest
Tags: Physics