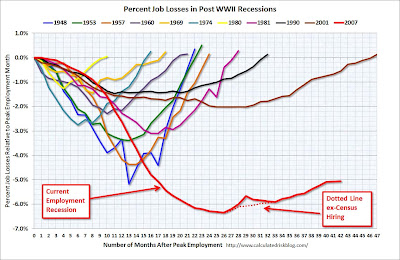 
In June, the private sector created about 57,000 jobs, about half the number neeed to keep the unemployment rate constant. But, those gains were muted by the loss of 18,000 public sector losses.

The unemployment rate increased from 9.1% to 9.2%, and the participation rate declined to 64.1%. Note: This is the percentage of the working age population in the labor force.

The employment population ratio fell to 58.2%, matching the lowest level during the current employment recession. . . . [a] measure of labor underutilization that includes part time workers and marginally attached workers, increased to 16.2%, the highest level this year.

The BLS revised down April and May payrolls showing 44,000 fewer jobs were created than previously reported.

There are a total of 14.1 million Americans unemployed and 6.3 million have been unemployed for more than 6 months.

Despite the dire situation, nobody in Washington is talking about stimulus and public sector layoffs killed 188,000 jobs in the first half of this year at a time when the economy needs more job creation, not less. The number of people working part-time because they can't find full time jobs and the number of people unemployed for more than six months are at near record highs.

Jobs have been below their peak for 42 months and are nowhere near returning to where they started. The longest previous post-war recession in jobs terms (the decline and recovery 2001 tech bust) created jobs to replace those lost in that recession in 48 months. But, that jobs slump was much more shallow; at its worst point 2% of payroll jobs were lost, while we are still 5% below peak now and we 6.3% below peak at the low point.

NPR noted this morning that GDP has actually been increasing for two years now, but the jobs situation is not catching up. Businesses are hoarding cash instead of investing. Interest rates remain remarkably low, but that isn't spurring more spending and borrowing. The leading economic indicators are negative, suggesting that we might even face a double dip recession.

This is happening at a time when the immigrant population of the United States is shrinking or constant. Inflation remains modest.

Politically, we are about six to eight months from the point at which the state of the economy starts to influence the next Presidential election. More pressingly, the U.S. will break though its debt ceiling by August 2 if corrective action isn't taken, possibly triggering a constitutional crisis or a default of the U.S. national debt that could have catastrophic economic consequences for the nation by driving up the interest rate that Treasury bond holders are willing to accept at a time when U.S. bonds have been a safe haven as many other developed nations are having to restructure or default on their sovereign debts and crisis after crisis looms on the horizon.
Posted 11:14 AM
Email ThisBlogThis!Share to TwitterShare to FacebookShare to Pinterest
Tags: Economics, Financial Crisis