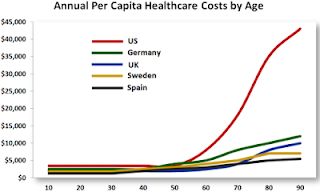 From here via here. (Note that commentary is skeptical and suggest that the presentation may be misleading in some respect.)

The United States is somewhat less efficient in providing healthcare to its citizens than other developed countries through age fifty or so.  But, it is dramatically less efficient in providing healthcare to older patients, despite the fact that healthcare for Americans over the age of sixty-five is predominantly via a single payer system called Medicare.  Less obviously, many not quite old enough for Medicare age Americans who have disabilities receive expensive health care via Medicaid.

The chart above illustrates this fact although it is important to remember that the older cohorts are smaller than the younger ones.  There are far fewer 90 year olds than there are 70 year olds, for example.

Of course, despite spending much more than other countries on geriatric care, the United States does not appear to achieve better outcomes.
Posted 2:34 PM
Email ThisBlogThis!Share to TwitterShare to FacebookShare to Pinterest
Tags: Economics, Health Care, Public Health

>The United States is somewhat less efficient in providing healthcare to its citizens than other developed countries through age fifty or so.<

I'd counter that US healthcare is quite a bit less efficient in providing healthcare to its citizens relative to other OECD countries, along with being quite a bit more expensive, and much less equitable.