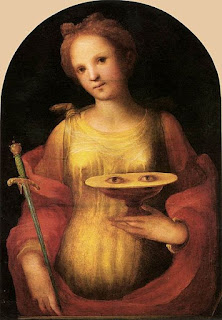 Today is the Saint's Day for Saint Lucy.

The Story of Saint Lucia


Saint Lucy (283–304), also known as Saint Lucia or Santa Lucia, was a wealthy young Christian martyr who is venerated as a saint by the Roman Catholic Church, Anglican, Lutheran, and Orthodox Christians. Her feast day in the West is 13 December; with a name derived from Lux, Lucis meaning "Light", as she is the patron saint of those who are blind. Saint Lucy is one of the few saints celebrated by members of the Lutheran Church among the Scandinavian peoples, who take part in Saint Lucy's Day celebrations that retain many elements of Germanic paganism.

Saint Lucy . . . consecrated her virginity to God through pious works refused to marry a pagan betrothed, and had her wedding dowry distributed to the poor. Her betrothed pagan groom denounced her as a Christian to the governor of Syracuse, Sicily. . . . Lucy's betrothed admired her eyes, so she tore them out and gave them to him, saying, "Now let me live to God". . . . In medieval accounts, Saint Lucy's eyes are gouged out prior to her execution. In art, her eyes sometimes appear on a tray that she is holding.

In some versions of the story, after she was denounced, Roman authorities threatened to drag her off to a brothel if she did not renounce her Christian beliefs, but are miraculously unable to do so, and so they gouge her eyes out instead.  According to Christian tradition she dies at age twenty-one, in some versions of the story not expiring despite being beheaded until the sacrament is administered to her disembodied head one more time before her death.

It is a bit stunning to think that medieval Europeans would see a woman who gouged her own eyes out in an effect to discourage suitors as a Christian role model, but sensibilities change.

The wave of persecution that Saint Lucy's story recalled, from 303 CE to 313 CE under  Emperors Diocletian, Maximian, Galerius and Constantius was the last and most severe of the persecutions of Christians in the Roman Empire, carried out with guidance from the oracle of Apollo.  "Although the persecution resulted in the deaths of—according to one modern estimate—3,000 to 3,500 Christians, and the torture, imprisonment, or dislocation of many more, most Christians avoided punishment."  It also provoked a schism in the Christian church of the Romans into loyalist and anti-imperial factions.

The Edict of Milan, strongly echoed in the First Amendment to the Constitution of the United States, which ended the persecutions in 313 CE provided that:


We thought it fit to commend these things most fully to your care that you may know that we have given to those Christians free and unrestricted opportunity of religious worship. When you see that this has been granted to them by us, your Worship will know that we have also conceded to other religions the right of open and free observance of their worship for the sake of the peace of our times, that each one may have the free opportunity to worship as he pleases; this regulation is made that we may not seem to detract from any dignity or any religion.

By 324, Emperor Constantine changed course on his policy towards Christianity, making it the state religion of the Roman Empire, and convened the convention of the church that produced the Nicene Creed which provided a formula to end centuries schism within the Christian church over religious doctrine.

The tolerance proclaimed by the Edict of Milan lasted only a few generations, however, after which the later Roman emperors embarked on a policy of persecuting pagans that ultimately caused the complete demise of that religion except in stories treated as fictional and covert pagan legacies sheathed in elements of the Christian tradition, such as Saint Lucy's Day.

The date of Saint Lucy's Day, like many Christian celebrations, has pagan roots.  It coincides with a Scandinavian pagan celebration that was something of a mix between Halloween and the Santa Claus myth.

Lussinatta, the Lussi Night, was December 13. Then Lussi, a female being with evil traits, like a female demon or witch, was said to ride through the air with her followers, called Lussiferda. This itself might be an echo of the myth of the Wild Hunt, called Oskoreia in Scandinavia, found across Northern, Western and Central Europe.

Between Lussi Night and Yule, trolls and evil spirits, in some accounts also the spirits of the dead, were thought to be active outside. It was believed to be particularly dangerous to be out during Lussi Night. According to tradition, children who had done mischief had to take special care, since Lussi could come down through the chimney and take them away, and certain tasks of work in the preparation for Yule had to be finished, or else the Lussi would come to punish the household. The tradition of Lussevaka – to stay awake through the Lussinatt to guard oneself and the household against evil, has found a modern form through throwing parties until daybreak. Another company of spirits was said to come riding through the night around Yule itself, journeying through the air, over land and water. . . .

Possibly, the origins of the choice of date is to be found in the fact that it falls 12 days before Christmas (Winter solstice) as both her name and the method of celebration points towards solar worship. The custom of starting celebrations 12 days before Christmas (Advent) and ending them 12 days after Christmas ("The Twelve Days of Christmas") is known in various Northern-European countries, with the Icelandic Yule Lads appearing on December 13 and the end of Christmas being celebrated with bonfires and fireworks on January 6.

My mother's sister, who never married and went blind as a young woman as a result of M.S., would have been a better fit for the role (although no one could have known that at the age when one commonly takes on that role), but I don't know if she was ever Santa Lucia in her local celebration in Michigan.

Tonya Hurley features the story of Saint Lucy along with that of two other young women who were Christian martyrs in her 2012 teen novel entitled "The Blessed" featuring modern teens who are reincarnations of the Saints after whom they are named in a mutual relationship that the characters themselves note has echos of a polygynous marriage, with a young man who is a reincarnated Saint who brings them together.

Hurley's novel has received very poor reviews, in part because of a choppy, affected, and emotionally vacant writing style, in part by due to its ham handed handling of Catholic religious aspects of the story, and in part, because of its excessive violence and torture.

While I am generally a fan of contemporary fantasy writing, the story of the young martyrs of the Great Persecution is so deeply context bound that it could be told much better as historical fiction that could bring this pivotal episode in the history of Western Civilization alive.  The large scale bureaucracy and relatively urban context of the Roman empire in its prime make it a more understandable episode of ancient history than most.  The inverted version of the story in the TV series Caprica, does a much better job with a similar subject matter.
Posted 9:56 AM
Email ThisBlogThis!Share to TwitterShare to FacebookShare to Pinterest
Tags: culture, Freedom of Religion, History, personal reflections, Religion