* The national animal of Scotland is the Unicorn.  It is much easier to come by the state pets of Colorado, which are shelter cats and dogs.  The Dumb Friends League which I frequently pass by when out and about around town has cats for $10.

* In June, I am moving to a rowhouse in Stapleton (a Denver, Colorado neighborhood) that looks like this (less the "A" pointer): 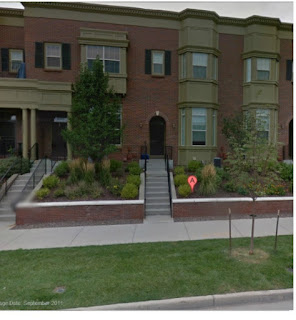 In addition to its street appeal, it also has the virtue of not being one of the handful of residential units in the metro areas at ground zero in the flood plain if the Cherry Creek dam ever busts.  This is not inconceivable as corners were cut in its construction, so it was not built to specification.  My current apartment and Denver Health are two of the most vulnerable structures if that ever happens.

* 255 Civil Union licenses had been issued in Denver since the law authorizing the marriage in all but name for state law purposes law was passed on May 1 through May 15.  In the same time period Denver issued 245 marriage licenses.  Since Colorado's law took effect, Minnesota and France have joined the ranks of jurisdictions with same sex marriage.
Posted 12:59 PM
Email ThisBlogThis!Share to TwitterShare to FacebookShare to Pinterest
Tags: Denver Neighborhoods, Gay Rights, Marriage, personal reflections, Public Safety

Just be careful.
If you invite a woman to stay the night remember that they put something in the water at Stapleton that causes women to become pregnant.