Are There Limits To Climate Change? 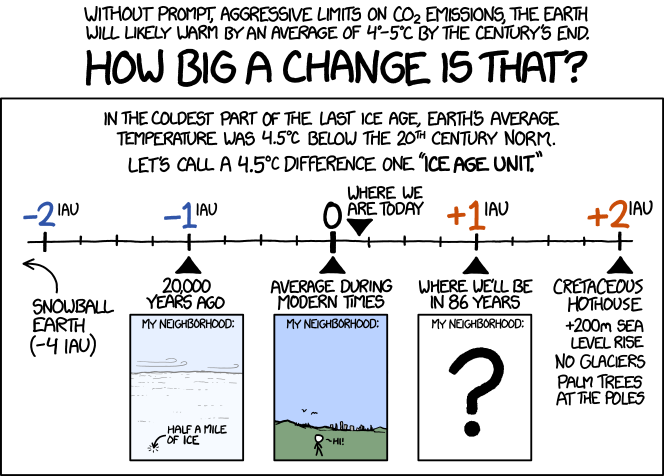 If we don't limit CO2 emissions by the end of the century, we will be in big global warming trouble.

But, it isn't clear to me that not limiting CO2 emissions is an option.  Sure, we could fail to adopt environmental regulations, but most CO2 emissions are due to hydrocarbon fuel combustion and we are also approaching Peak Oil.

Peak Oil doesn't mean that we will suddenly run out of oil.  It means that supply will start shrinking, as an indirect consequence of the finite supply of oil and gas, while demand will continue to rise.  This will drive up oil and gas prices, which will reduce consumption, not to zero, but as we get further and further past Peak Oil, to a greater and greater extent.

There is good reason to believe that we are already at Peak Oil, or will be there soon (in a matter of a few years).


There is a general consensus between industry leaders and analysts that world oil production will peak between 2010 and 2030, with a significant chance that the peak will occur before 2020. Dates after 2030 are considered implausible. Determining a more specific range is difficult due to the lack of certainty over the actual size of world oil reserves. Unconventional oil is not currently predicted to meet the expected shortfall even in a best-case scenario.

For unconventional oil to fill the gap without "potentially serious impacts on the global economy", oil production would have to remain stable after its peak, until 2035 at the earliest.

Given the large range offered by meta-studies, papers published since 2010 have been relatively pessimistic. A 2010 Kuwait University study predicted production will peak in 2014. A 2010 Oxford University study predicted that production will peak before 2015. A 2014 validation of a significant 2004 study in the journal Energy proposed that it is likely that conventional oil production peaked, according to various definitions, between 2005 and 2011. Models which show a continued increase in oil production may be including both conventional and non-conventional oil. Major oil companies hit peak production in 2005. . . .

As of 2012, both world crude oil production and remaining proven reserves were at record highs.

Thus, there is very good reason to believe that with or without environmental CO2 regulations, that world CO2 emissions will fall significantly before the end of the century.

The big question is whether or not coal will be substituted for oil and gas as they come into short supply and make up for the shortfall in CO2 emissions caused by reduced oil and gas consumption.  The global supply of coal is also finite, but Peak Coal is not likely until far more than 86 years from now.  If we substitute solar and wind and hydro power and energy conservation for declining oil and gas supplies, global warming worst case scenarios won't come to pass.  If we substitute coal, they might.
Posted 4:37 PM
Email ThisBlogThis!Share to TwitterShare to FacebookShare to Pinterest
Tags: Climate, Energy, Peak Oil, Technology