* Last week Oshkosh beat out AM General (the contractor that made the Humvee) and Lockheed Martin for the U.S. military's JLTV(Joint Light Tactical Vehicle) contract.  In order to thwart anticipated challenges to the contract award by AM General and Lockheed Martin, the U.S. military did not announce its reason for choosing Oshkosh over its competitors.

The JLTV is the successor to the Humvee with greater protection from mines and (with optional armor) gunfire as a primary objection, intended for use by the U.S. Army and the U.S. Marines.   The Oshkosh contender, also known as the L-ATV, is a variant of its heavier M-ATV MRAP (Mine Resistant, Armor Protected) vehicle procured for Afghanistan, that maintains roughly the same level of protection from threats.

The Humvee was highly vulnerable to mines due to its flat bottomed design which had optimized its off road capabilities, had no armor in its base version, and degraded quickly mechanically when up armored since it was not designed for the extra weight.

The 7 ton vehicle is heavier than the Humvee, but still light enough to allow more than one to be carried in a C-130 intra-theater transport plane.  The initial contract for about 16,901 units for the Army and Marines combined will cost the U.S. Army and Marines about $400,000 each (the target price had been $250,000 each and the per unit price will probably come down a bit in full production as R&D costs are spread over more units).  Current plans are for an eventual buy of 55,000 or so of these vehicles. 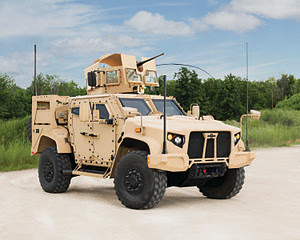 
It isn't obvious from the picture above, but the Oshkosh L-ATV is much larger than the Humvee.

The armored Humvee cost about $220,000 each and was about 3 tons.  About 289,000 Humvees were built and they will not be replaced on a 1-1 basis by the JTLV as originally contemplated.  In hindsight the main flaws in the Humvee were:

1.  Building a military vehicle that provided little improvement in protection from direct hostile gunfire or mines from a civilian vehicle.  This would be appropriate for a vehicle intended to be used only within secured bases, but made no sense for vehicles intended to be used on patrol in hostile territory where armed opponents lurked, or following tanks and Bradley infantry fighting vehicles in off road ground wars between peer class military forces as originally contemplated.

This was also a flaw of the Jeep that preceded it.  But, since Jeep type vehicles when used in World War II had little exposure to environments where snipers lurked around every corner and expectations of force protection were lower, this defect of the Jeep didn't factor into the Humvee's specifications.  If anything, the military wanted to design systems ill suited to counterinsurgency missions in order to (futilely) discourage higher ups from committing U.S. troops to such missions in the wake of the Vietnam War.

2. Focusing design criteria on off road capabilities comparable to those of tracked tanks despite the fact that Humvees, in practice, were overwhelmingly driven on roads. The Humvee is perhaps the best off road wheeled vehicle ever mass produced, but the actual niche of military need for off road patrol vehicles was profoundly smaller than military planners imagined. This flaw is not entirely unrelated to first one. Design choices made to optimize off road capabilities made the Humvee more vulnerable to mines than it otherwise would have been. Per Wikipedia on the Humvee:


Compared to the jeep, it was larger and had a much wider track, with a 16 in (410 mm) ground clearance, double that of most sport-utility vehicles. The new truck was to climb a 60 percent incline and traverse a 40 percent slope. The air intake was to be mounted flush on top of the right fender (or to be raised on a stovepipe to roof level to ford 5 ft (1.5 m) of water and electronics waterproofed to drive through 2.5 ft (0.76 m) of water were specified. The radiator was to be mounted high, sloping over the engine on a forward-hinged hood.

The Humvee may be one of the better military surplus items to put in civilian use, however, for some of these same reasons. For example, it is well suited to fighting wildfires in roadless terrain, and to use by ranchers, oil and gas exploration operations, emergency medical technicians and archaeologists in roadless areas.  In these applications, a excellent off road capabilities are a virtue and a lack of protection from hostile gunfire is not a problem.

The JTLV should address both of these flaws, and is unlikely to reveal equally serious new flaws because similar Ohskosh M-ATV design was tested extensively in Afghanistan in hostile fire conditions in similar missions to those contemplated for the JTLV.  It remains to be seen, however, if there might be flaws in the JTLV when used, for example, in a tropical jungle environment, an arctic environment, or in a more conventional warfare setting than the counterinsurgency operations that U.S. ground forces have faced in its recent engagements.  Planners have attempted to address all of these concerns, but they have not been battle tested.

* The loss of access to suppliers in the Ukraine due to Russia's seizure of some of its territory, an inability to obtain replacement suppliers in the West for the same reasons, and a weak economy in Russia, as well as the fact that Russia is trying to support all of the Soviet Navy with a smaller population and economy than the Soviet Union had, has taken a huge toll on the Russian Navy. The bottom line:


On paper the Russian Navy currently has 270 combat ships (including amphibious and combat support vessels). But only about half of these are in any shape to go to sea. The rest are too old, and usually too poorly maintained for too many years, to leave port. Russian shipyards are terrible at building or repairing ships and efforts to remedy this have so far failed. Thus only about 15 percent of Russian naval vessels are major surface warships or submarines. In comparison the U.S. Navy has 290 warships and about 85 percent can go to sea (the others are being upgraded or repaired.)

As a result, the U.S. blue sea naval superiority is actually considerable greater than one would naively expect.

* A new U.S. military system called Serenity (which given that it has a component called "Firefly", is clearly science fiction inspired naming) uses acoustics, heat sensors and cameras to identify where incoming fire is coming from and what kind of weapon is being used and to automatically point weapons and video cameras in that direction. This is a refinement of previous systems. "By 2010 over 60,000 sniper detectors had been shipped to American troops in Iraq and Afghanistan, where they were increasingly useful and generated a continuous flow of user suggestions for improvements. These were addressed and that resulted in new and improved models appearing every year."

Similar systems are also starting to make their way into the civilian markets, including Denver, where police pre-locate these systems in high crime areas.

* While the Littoral Combat Ships (recently renamed frigates) are getting the bugs worked out, for example, with a larger base crew of 50 instead of 40, bugs remains with the mission modules that tailor the multi-purpose ship to particular missions. Among the models not working right are an anti-submarine package that is working well but overweight, the Mine Countermeasures module that is having problems with systems integration, and the module that would carry 24 Hellfire missiles is also having implementation problems due to a late start after the originally planned Griffin missiles proved to be too slow to take out hostile targets.  Fixes are expected in the 2016-2017 time frame.

* Three new Virginia class attack submarines purchased by the Navy will need immediate maintenance work because some of the pipes used in the construction were not up to specifications.  But, the U.S. is churning out new state of the art nuclear attack submarines while its global competitors are either not doing so, or are doing so at a much slower rate.
Posted 7:11 PM
Email ThisBlogThis!Share to TwitterShare to FacebookShare to Pinterest
Tags: Crime, culture, Military, Technology