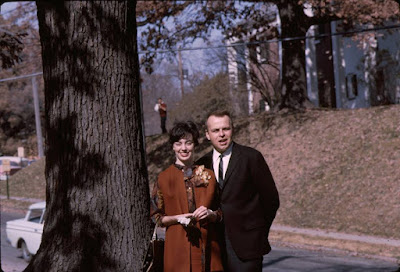 Arne and Mary Blomquist on a happier day, quite a long time ago (via Kathy Blomquist).

My mother, who died of breast cancer shortly after retiring, and my Aunt Kay, who died in middle age of M.S. that manifested itself while she was in college, have predeceased him, as did his sister's husband, my uncle Dale, who also had a prolonged and difficult struggle in his final days. Arne is survived by his wife, Mary, his sister Rose, his brother Roger and his brother's wife Trish, his brother-in-law, my father, and his two daughters, Kathy and Chris, as well as nieces, nephews, other relatives on his wife's side whom I don't know, and a lifetime of friends, mostly in the Upper Peninsula of Michigan, in the Twin Cities of Minnesota, and in Tanzania.

It would be wrong to say he was my "favorite uncle", for I have loved all of my uncles in their own ways. But, of my four uncles and five aunts, he was the one most similar to me who I understood best. Like my late mother, who was his sister, he was vigorously engaged in the world of ideas and cared greatly about the larger world beyond his own personal experience.

To a greater extent than any of his siblings (not unlike my father who grew up in similar circumstances in rural Ohio but then moved on to academia), he fully acclimated into cosmopolitan big city life in the larger world beyond his rural home as if he had been born to it. But, he was never a stranger to the place he grew up and always retained strong ties there.

He was an independent critical thinker who had a tendency to dominate discussions through intelligence, knowledge and force of will. It rankled him just a little sometimes, that my father was older than him, after he had spent his life being the eldest in a large family and the leaders of the Blomquist children, a position in which my lower key father never really challenged him in truth. He didn't worry about offending people he thought were in the wrong, which isn't to say that he lacked social skills. Far from it. He could and did lead people to get things done.

He was the oldest of the two boys and three girls who lived to adulthood in the family, all children of a lumber jack without a college education whose home grown potatoes and vegetables, as well as his fishing and hunting, made the difference between having enough food and not for the family. His father had had an arranged marriage, but Arne and all of the other children married their own chosen mates for love. They grew up in a small house his father helped build himself from a mail order catalog design, with an outhouse, clothes that were dried on a clothesline in the back yard, a washing machine was a hand cranked wringer, and a party line rotary phone.  The house's roof was (and still is) aligned with the North Star.

They were grandchildren of poor Swede-Finn immigrants who picked up only bits and pieces of the Swedish language used at home and at church (mostly expletives, aphorisms, and religious phrases, along with a few names of simple household things). But, he and the other children were, at least in adulthood, in contact with many our Finnish relatives (the Finns are great genealogists, our family has roughly 100,000 relatives documented in privately prepared Finnish genealogies, a substantial share of the entire nation's population and an even larger share of the particular region from which our ancestors emigrated; one is even a Finnish Knight in honor of his life saving work overhauling Finland's water and sewer systems).

Despite tough economic circumstances, Felch in Dickenson County, where they lived, an hour from the nearest decent grocery store in Iron Mountain, has an idyllic character not unlike the fictional town of Lake Woebegone in Garrison Keillor's Prairie Home Companion radio show that I always related to as a child. Life seemed to revolve around coffee cake and weak brewed coffee after services at the local Swedish Lutheran church, the omnipresent forests of firs and birches that surrounded their homes and the lonely rural roads, and hunting stories. So far as I can tell, none of the family has ever perceived themselves as disadvantaged, even though they undoubtedly wanted for a great deal in their youth.

Still, four of the children, including Arne, graduated from college. Rose married young, stayed close to home and had four children in the world she grew up in where she still lives today, where her family has provided Felch and Dickenson County with pillars of the local community.

Arne made a comfortable living for himself and his family in an engineering business and then lost a great deal in a turn of business misfortune. He and his wife Mary paused to reflect and decide what they wanted to do with his life.  Then, they did it, reviving the business and leading a group of committed Minnesotan Lutherans to establish Tanzania's first private university, which is affiliated with the Tanzanian branch of the Evangelical Lutheran Church in America (the mainline Lutheran denomination).  They found books and professors, guided the students to literally make the bricks with which they then built its buildings, and as much as anything, provided know how and leadership free of the corruption that infects most African bureaucracies. He was particularly proud of the way that the law faculty there created a source of lawyers independent of the government.  Christian churches are powerful across sub-Saharan Africa, we learned from him, because they mobilize communities to take positive action and improve their parishioner's lives.  During his time in Tanzania, he was a U.S. counsel, a position for which the main qualifications in this part of the world are a secure home to keep critical records about Americans and a stable familiarity with the community.  They built a grand cabin and Christmas tree farm in the UP to retire to in their old age, in substantial part with their own labor, the labor of their children and their children's partners, and other family. Then, they persevered when much of it was destroyed in a fire, so that it is now usable again.

His two daughters have displayed similar initiative. He tried to teach them to hunt, although neither was very excited about it. Time sent working for Habitat for Humanity gave them valuable skills. Kathy became an engineer, restored multiple houses with her life partner Mike, and until just recently  when her job was relocated, worked for a Japanese company selling technical equipment. Chris married her high school sweetheart, college best friend and co-adventurer in life, also restoring homes along the way. Chris and her husband now make a living running a non-profit they established in college. Arne wouldn't necessary have made or recommended some of the choices that his daughters made in life, but in the end, he respected their independence, their initiative and their prerogative to make their own decisions, so long as they carried them out purposefully and competently (which they did).

Arne suffered no fools, and understood what it took to make things happen and how the world worked in ways that most people only think they understand. He had a sharp wit until his psychologically agonizing final days when diseases of old age preyed upon this as well as his body over many years.  This was agony for those of us who loved him, especially Mary who always faithfully supported him and advocated for the best possible care for him sustaining him much longer, and much better in the quality of his life, than he would have managed otherwise.  We looked on helpless to prevent the inevitable, which finally arrived in full, yesterday.  The slow progression of the ailments was painful for all, but it has also left us mostly at peace with the inevitable now that it has arrived.

We value the lessons that he taught us over the years, as much by example as through formal instruction. He taught us that you can make your own fate and are not a prisoner of your circumstances. He taught us that ideas and the greater world matter and that you should play a part in shaping that world. He taught us that physical assets and money are inconsequential in importance relative to your own human capital. He taught us that much can be accomplished with hard work, resourcefulness, know how and clarity of purpose. He taught us that having purpose in life and engaging with the world makes your life meaningful and worth living. He taught us how to raise children to be independent, self-directed and effective, yet caring, themselves.

We will all miss him sorely.

This remembrance is prepared solely from my own recollection and memories of my own family's history, and if there are inaccuracies or this post causes any offense, I apologize. Any mistake or offense is my fault and is unintended.
Posted 10:53 AM
Email ThisBlogThis!Share to TwitterShare to FacebookShare to Pinterest
Tags: Africa, culture, Economic Development, Obituary, Parenting, personal reflections, Religion, Social Class