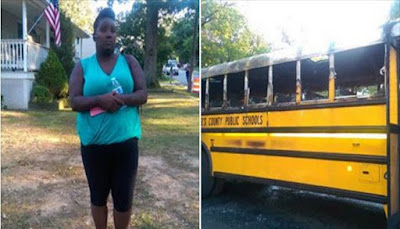 Reneita Smith of College Park, Maryland isn’t just dedicated to the kids she drives to school, she cares for them like her own. When the school bus full of 20 elementary school children Smith was driving suddenly caught fire yesterday afternoon, Smith’s only concern was making sure that each and every child in her care was off that bus and safe.

According to Smith, an illuminated brake light indicator was the first indication that something wasn’t right. Neighbors who saw the incident said they saw flames coming from the wheels of the bus. When Smith realized the bus was on fire, she didn’t even hesitate over what to do. “I opened my door, took off my seat belt, and I got my babies off that bus,” she told NBC. Smith went back into the flaming bus repeatedly until all 20 students were off the bus. A neighbor herded the children into a nearby yard a safe distance away. Then, just to be sure everyone was accounted for, Smith went back into the bus. “I ran back onto the bus to make sure that every seat was clear,” she said.

One person's bravery can make all the difference between an epic tragedy and a merely bad day. Of course, in an ideal world, school buses wouldn't suddenly catch on fire and make it necessary for someone to be a hero to avoid a tragedy.
Posted 9:31 AM
Email ThisBlogThis!Share to TwitterShare to FacebookShare to Pinterest
Tags: heroes, Public Safety