The South Was Opposed To Giving Women The Right To Vote

The geographic boundaries of opposition to civil rights have changed only modestly in the last 97 years. 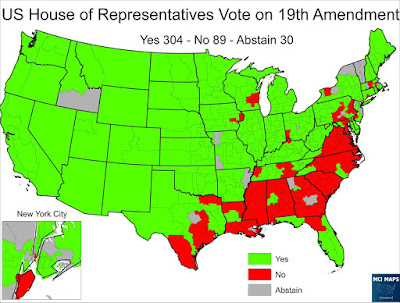 The 19th Amendment gave women the constitutional right to vote. As required to propose a constitutional amendment, more than two-thirds of the U.S. House of Representatives supported the amendment.  But, it was opposed throughout the Southern states, almost uniformly.  The vote was held on May 21, 1919.  The amendment subsequently passed by the required two-thirds majority in the U.S. Senate, and was ratified by the states on August 18, 1920.  Many states, including many that had previously rejected the amendment (in some cases decades later), subsequently ratified the 19th Amendment after it was a moot point.

The House had previously voted by the required two-thirds majority, but with a much narrower margin on January 10, 1918, but the Senate narrowly rebuffed that attempt.

It is fair to infer that if the South had been allowed to secede in 1861, that the Confederate States of America would not have granted women the right to vote until long after 1920, if it would ever have done so at all (which the global experience suggests that it eventually would have).  Many Southern states symbolically ratified the 19th Amendment in the period from 1941 to 1984, and it would have taken until 1984 if the ratifications were made at the same time in an alternative history, for the measure to receive the necessary supermajority approve in the Confederate States of America.
Posted 2:45 PM
Email ThisBlogThis!Share to TwitterShare to FacebookShare to Pinterest
Tags: Alternative History, Civil Liberties, Congress, culture, Election Law, Feminism, History, Political Identity

Could this have been a tactical approach? I.e. If we let women vote then we'll have to let blacks have an effective vote as well.