Why Has The Electoral College-Popular Vote Gap Grown?

The gap between the electoral college vote (which produced a majority for Donald Trump), and the popular vote (which favored Hillary Clinton by more than 2 million votes) was larger than at any time in U.S. history in 2016, although it has favored Republicans for some time now. This is the second time in five elections that Republicans have won the electoral college while losing the popular vote.

Why did this happen?

As recently as 1988 (the first Presidential election in which I voted and a single generation ago), there was only a slight divide between relative levels of Democratic and Republican support in urban and rural areas. But, in every Presidential election since then, the urban-rural divide has intensified, and since at least the 2000 election, population density has been an excellent predictor of partisan leaning. 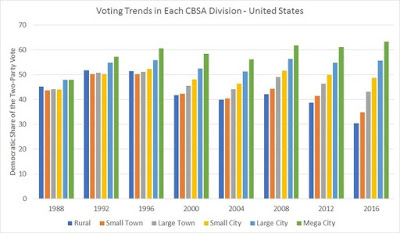 Strong support in dense urban areas that affect only a minority of electoral votes is inefficient relative to support distributed across rural areas that have more electoral votes. As Sean Trende explains at Real Clear Politics:

In other words, the Democrats’ coalition of the ascendant is very inefficiently distributed. We therefore opted to utilize a demographic (urbanicity) that is easily filtered through a geographic component (CBSAs) and that people intuitively think of in geographic terms. What we discovered is a different dimension to the Democrats’ demographic inefficiency problem: They are becoming far too clustered in urban centers to be effective, even when they win the popular vote.

Winning mega-cities by 30 points is great, but her margin there was mostly (though not entirely) neutralized by her poor performance in large rural areas and small towns alone. Again, her vote in these mega-cities was also inefficiently distributed in already-blue states; the swing states with mega-cities tend to have large amounts of rural land, which is why she lost Florida, Georgia and Pennsylvania. Finally, we note that while rural and small-town America are disappearing, that disappearance is happening much more gradually than people appreciate…

But we get back to our initial point: In our system of government, popular vote metrics are only sensible when put through a geographic filter. This causes problems in the Electoral College, which we’ve recounted before. There are only nine “mega-cities” in America: New York, Los Angeles, Chicago, Washington, D.C., Philadelphia, Miami, Atlanta, Houston, and Dallas. These, in turn, affect 11 states: New York, New Jersey, Connecticut, California, Illinois, Virginia, Maryland, Pennsylvania, Florida, Georgia and Texas.

But if it causes problems in the Electoral College, it wreaks havoc in the Senate, House, and state legislatures. While only 11 states have mega-cities, 18 states have neither mega-cities nor large cities. To put this in perspective, a party that sweeps the rural and town-dominated states starts out with 36 Senate seats. This won’t happen, of course – Vermont isn’t going Republican any time soon – but Republicans also have a solid foundation in states with large cities, like Oklahoma and Kansas. Because of the Democrats’ concentration in cities, and because of the concentration of the urban vote in relatively few states, the Senate is now a natural Republican gerrymander. In the House, it is largely the same story.

Ideally, the United States would change its electoral system so that the Presidency would be elected based upon the popular vote, rather than the electoral college vote, and so that legislative seats would be elected in some sort of proportional representative system within each state.

The lion's share of modern, Western-style democracies either have that kind of system, or have a proportional representation parliament with a merely symbolic Presidency comparable to a constitutional monarch.

There is widespread public support among members of the general public for electing the President based upon a popular vote basis (although Republican support for this dropped dramatically after the most recent election), rather than through the electoral college, and there is nothing unconstitutional about allowing states to elect members of Congress and their state legislatures on a proportional representation basis.

The single member plurality election system in place at the federal level in all but a couple of U.S. states, is a product of a federal statute requiring members of Congress to be elected from single member districts, and state statutes implementing that requirement in most cases through a partisan primary or caucus in each party in each district followed by a plurality general election vote in each district.

But, for the short to medium term, the reality is that Democrats don't have the political power necessary to secure these kinds of changes in the election laws.

The only alternative available to Democrats is to find a way to expand their coalition in a way that would deliver more swing states to it.

This isn't necessarily a big stretch. Political party coalitions are always in flux and if the Democrats can can make net additions to their coalition in swing states that pick up a few percentage points (even if it comes at the expense of the magnitude of their support in large urban areas), then Democrats can win majorities.

During the period of realignment that has been gradually progressing every since Goldwater, socially conservative, often rural voters, especially in the South, have shifted their allegiance to the Republican party, while socially liberal, often urban affluent voters, especially in the Northeast, have shifted their allegiance to the Democratic party.

In terms of the raw proportion of U.S. voters leaning in favor of each major party, realignment has more or less been a wash, a fact reflected in the ability of Hillary Clinton to win the popular vote in 2016 by more than two percentage points. But, realignment has made the Republican coalition more efficient in the electoral college and legislative races, while making the Democratic coalition less efficient in translating popular vote support into electoral college and legislative majorities. The departing coalition members disproportionately live in states with lots of rural and small town voters. The new coalition members live states with high population density centers.

In addition to realignment, Democrats have suffered from the decline of the private sector union movement, some of which has been driven by the long term trend of declining manufacturing employment due to a combination of automation and offshoring in search of cheaper wages and less regulation abroad.

Mr. Trende points to the possibility of expanding the Democratic coalition by essentially rolling back the clock:

Democrats were once able to win rural areas, and send large numbers of members of Congress from these places. That was in part because they focused their message on these areas, and tolerated culturally conservative Democrats like Harold Volkmer in Missouri and Sonny Montgomery in Mississippi.

But for much of the Obama administration, these members were forced to take a series of tough votes that rendered the Blue Dog Democrat a near-extinct species. Hillary Clinton’s campaign in 2016 was almost entirely directed toward the coalition of the ascendant in mega-cities, which is a decent enough coalition for the popular vote, but is highly problematic for the Electoral College.

We very much doubt that liberal Democrats will like some of policy compromises that winning back these areas probably entails. We suspect, however, that they will find that preferable to the policies that will be enacted over the next four years.

I think he's wrong on that score. The Democrats do need to expand their coalition, but they aren't going to succeed in doing so by winning back socially conservative, evangelical Christian white Southerners.

One really shocking Democratic stumble in this election, with a group that has been tossed back and forth between the parties at least since Reagan, has been a failure to get much support from the people who remain in the economically devastated shrinking cities of the Rust Belt. These people live in what used to be Democratic union strongholds fueled by manufacturing jobs. The manufacturing jobs are gone, but the people are still there and feel deeply alienated.