The Colorado Sun summarizes a recent study on earnings outcomes based upon educational choices made after high school.


In a nutshell, education is a very poor economic return in Colorado. A four year education degree is still better than non-college, but is worse than any other four year college major and all other associates degrees except those in the social sciences. Educators with associates degrees actually do worse than high school graduates with no college.

Mostly, this is unsurprising, although more clear than some past studies that I've seen. The main notable difference from my "priors" is that four year business degrees have much higher returns in Colorado than in many previous studies that I have seen. 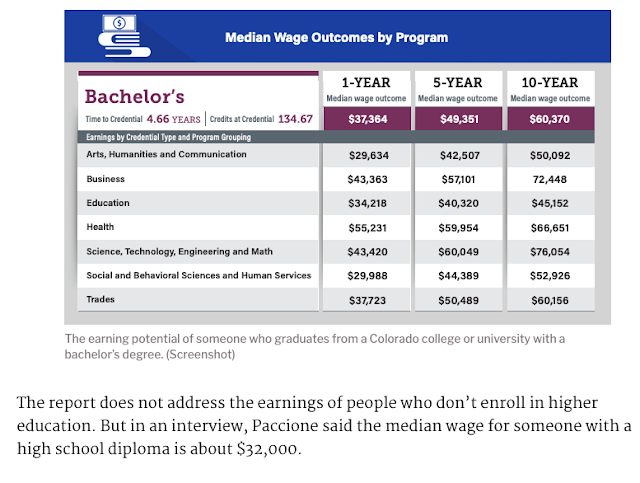 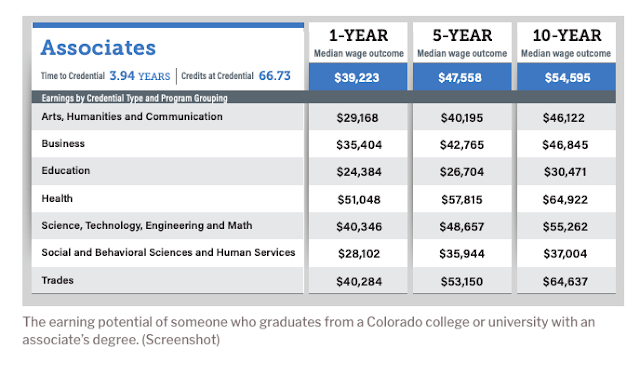 One fairly obvious conclusion is that in Colorado, where teachers wages are heavily influenced by state appropriations for K-12 education, we significantly under-compensate teachers who should be paid about 15% more than they are in non-STEM positions in order to be comparable to similar college graduates, and teachers in health and STEM field should make more like 45% more, with a combined blended educator's median pay that should be more like 20% (the median is not very sensitive to the impact of blending high subsets of the whole into it).

In the case of early childhood education, which is the main two year education degree, the degree arguably has negative economic value by directing people who take it to a career path less remunerative than the career path of an average high school graduate with no further education.

Another fairly obvious conclusion is that STEM education, including health science and skilled trades, even in the case of two year degrees and certificate programs, add a lot of value and that we should encourage it, at least to the extent that we have prospective college students qualified to pursue those programs.

And, it does show that getting higher education does add significant economic value with only a couple of modest exceptions.

The wage data above is based upon data from the roughly 50% of graduates who could be matched to income data.

Benchmarks for high school graduates with no higher education and for people who do not graduate from high school (with and without a GED) are not provided.

The study also does not evaluate the economic prospects of people who start a degree but don't finish it, which is a critical issue since dropout rates are high at almost every level of higher education in Colorado. It also appears to be limited to graduates of public colleges and universities.

It is also worth noting that graduating on time (let alone early as my daughter is about to and I did) is not the norm in Colorado.